Characterization of the Yeast Gene YDL218W: A Role in Cell Wall Biosynthesis and Maintenance? 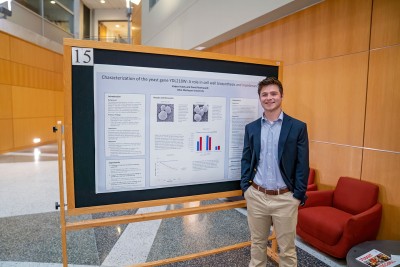 The budding yeast, Saccharomyces cerevisiae, is a common model organism used to study eukaryotic cell biology. S. cerevisiae is a fungus with a cell wall which makes it an excellent model for the study of antifungal agents. There are close to 1,000 genes of unknown function (GUFs) in S. cerevisiae. One of these is the gene YDL218W on which our research is focused. While little is known about this gene, evidence suggests that it may be involved in cell wall synthesis or maintenance. For example, YDL218W is induced by a transcription factor known to regulate genes involved in maintaining cell wall integrity. YDL218W also contains a domain found in proteins that are necessary for a functional cell wall. To test the idea that this gene has a role in cell wall synthesis or maintenance, we have exposed a strain carrying a YDL218W deletion to two agents known to disrupt the cell wall. We have measured changes in growth rate and viability as well as morphological changes using scanning electron microscopy.