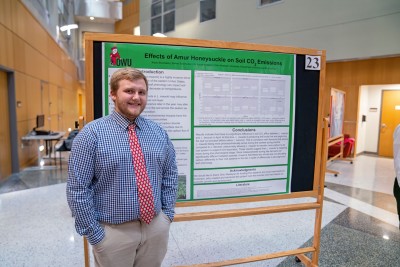 Lonicera maackii is an invasive woody species found in Ohio and throughout the deciduous forests of eastern United States, taking over habitats of native shrub species such as Lindera benzoin. L. maackii has unique traits compared to deciduous forest natives, showing earlier leaf-out and later leaf senescence, higher leaf nitrogen levels, and faster leaf decomposition. As a result, L. maackii may alter soil conditions through its extended root activity and impacts on microbial decomposition, possibly impacting soil CO2 emissions. As soil microorganisms metabolize organic matter, they release greenhouse gases like CO2 through respiration, which can impact global climate change. Previous research has shown that microbial respiration under an invasive shrub of the Mediterranean coastal dunes was significantly altered compared to the native species of this ecosystem, indicating a possible total increase of greenhouse gas emissions. However, the effects of L. maackii on soil respiration have been understudied, with no considerations towards the possible effects of this shrub on local forest greenhouse emissions. To monitor CO2 emissions underneath L. maackii, a LI-COR LI-6400 was used to measure CO2 efflux using PVC soil collars embedded into the soil. These measurements were compared with soil efflux data collected from beneath native L. benzoin as well as patches of open soil at least 1 m away from the canopy drip line of any shrub. Soil respiration measurements collected from June 2018 to November 2018 showed no significant differences in CO2 emissions among the three soil conditions. However, these measurements were taken during the most and least productive seasons for both native and invasive plants. This can explain their similarities in respiration rates. More measurements during leaf out of L. maackii will be collected to further define the differences between these shrub species.