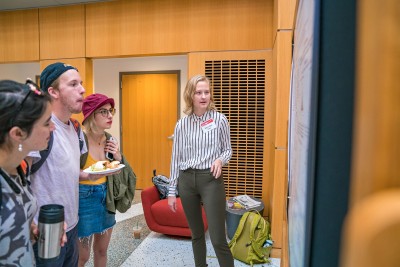 Candida albicans is a yeast that normally exists in and on our bodies, but can causes yeast infections, as well as life-threatening deep-tissue infections. C. albicans uses an abnormal sexual cycle, called parasex, that makes identification of genes involved in disease-causing traits difficult. Our team is working to adapt a gene-identifying method that has never been used in a parasexual species to identify genes involved in drug resistance. Identification of these genes could lead to new drug targets in the future. In addition, the adaptation of this method will allow other researchers to easily identify genes linked to disease-causing traits in other parasexual species.

Candida species are the most clinically relevant fungal pathogens, with C. albicans being the most prevalent. The standard frontline treatment for Candida is the azole class antifungal drug fluconazole. Resistance to fluconazole has increased since its introduction into the clinic. Although characteristic mutations are known to contribute to fluconazole resistance in C. albicans, ~33% of resistant isolates do not encode these genetic signatures of resistance. A lack of unbiased genotype-phenotype analysis methods exist for C. albicans due to a lack of meiosis, making identifying the mechanism of resistance in these isolates challenging. Quantitative trait loci (QTL) mapping is a method that uses meiosis to identify genetic loci contributing to a phenotype. Here, we describe an approach utilizing the alternative parasexual cycle of C. albicans to perform QTL mapping of a strain encoding an unknown mechanism of fluconazole resistance. This methodology will provide an unbiased method for identification of loci involved in virulence traits in any parasexually replicating species.