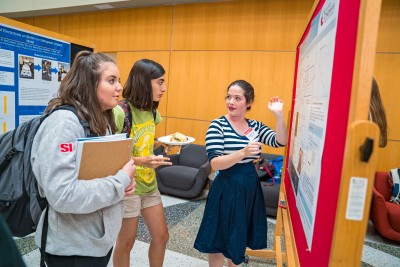 I was studying a disease called Eosinophilic Esophagitis (EoE), which is an allergic inflammatory disease characterized by inflammation of the esophagus in response to food triggers. I was looking for how genotype, whether the person had risk or non-risk alleles at that specific location, affected the levels of gene expression for genes and loci that had been previously identified with increased EoE risk. We predicted that genes near these loci associated with EoE would exhibit genotype-dependent gene expression changes.

Eosinophilic Esophagitis (EoE) is a chronic allergic inflammatory disease characterized by infiltration of Eosinophils into the esophagus where they cause inflammation in response to food triggers. EoE is highly heritable and many genetic variants associated with EoE are located in noncoding regions of the DNA. Many non-coding variants are thought to affect nearby gene expression through mechanisms such as transcription factor binding. Previous studies have identified specific genetic loci that are associated with increased risk of EoE. Absolute qPCR was used to measure expression levels of 6 genes associated with EoE risk in biopsies from 96 patients with EoE. These expression levels were combined with genotyping data from the same 96 patients at 5 EoE risk variants for use in an expression quantitative trait loci (eQTL) analysis. The eQTLs of tissues from patients with EoE will be compared to eQTLs from healthy tissues to identify gene expression trends with pathological significance.