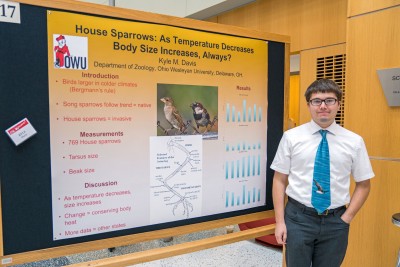 Evolution is typically seen as a process that takes millions of years to take place. Most studies on evolution use native species, or fossils, which have been in their environment for millions of years. Although we know that changes can be seen after millions of years in native species, we don’t know when we could begin to see these changes taking place. Invasive species are destructive to the environment, and are typically seen as a pest. Although they are a pest, invasive species can be used to    determine how long it takes for a species to adapt to a new environment. Often, we know the date and the location that the species was released, which can be used to determine how much time is needed for the introduced species to become different from their ancestral populations. While we know evolution happens over a long period of time, species such as the House sparrow (Passer domesticus) can be important in understanding how much time is needed to see changes in an organism. The House sparrow was introduced to North America about 400 years ago. Since its introduction in New York City, the House sparrow has slowly expanded its range and can now be found across North America.  Due to the varying climates and habitats found in North America, we hypothesize that the House sparrow has begun to change in size and that these changes will be noticeable in their tarsometatarsus and bill lengths.