Paternity and Mating Behaviors in the Sailfin Molly, Poecilia latipinna 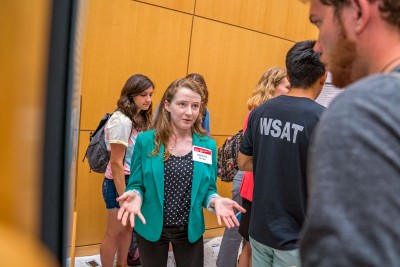 We are observing the mating behavior of fish in an attempt to better understand why certain male behaviors or characteristics evolve and how this may lead to new species. Male sailfin mollies (Poecilia latipinna) compete for females by using aggressive behavior towards other males and by using their enlarged fins to attract females. To determine if certain male behaviors influence the amount of offspring that a male fathers, we are observing males attempting to mate with female sailfin mollies, then using genetic techniques to determine who fathered the most offspring and what mating strategy was most successful.

The emergence of male secondary sex characteristics and courtship behaviors may influence female mate choice and/or male-male competition. Male sailfin mollies (Poecilia latipinna) are an ideal study species for understanding how emerging traits and behaviors correlate to mating success because they have two distinct features: enlarged dorsal fins and courtship displays. Broods may have multiple fathers, and within these multiply-sired broods, there can be unequal representation of offspring sires. To determine if male behaviors correlate with mating success, we studied courtship behavior and paternity in P. latipinna. We conducted behavioral observations during which two size-matched males were introduced simultaneously to a receptive female. All courtship behaviors (sailfin displays, gonopodial thrusts, gonopodial nibbles) and dominance behaviors (sailfin displays, chasing, blocking, biting) were recorded using the software The Observer XT 11. In 20 broods, all females, potential sires, and offspring were genotyped using eight microsatellite loci, then the program Colony was used to determine paternity. Potential correlations between the frequency of certain male behaviors and the representation of offspring sires may lead to a better understanding of population divergence and speciation in this group of fishes.