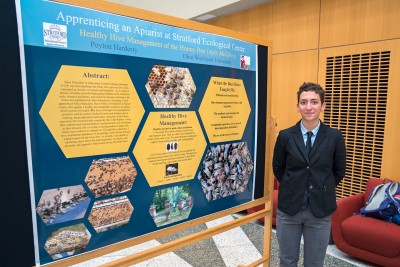 As a beekeeping apprentice, I have learned healthy hive management methods that are drawn from observing the honey bee’s instinctive behavior and natural processes. As the honey bee population declines, the necessity of spreading awareness to the public grows in pertinence, for our agricultural system will suffer from the plight of the honey bees. My acquired knowledge, interest, and skill as an apiary apprentice has readied me for educating others and thus, being an effective agent in the effort to save the honey bees.

Since November of 2006 when Colony Collapse Disorder (CCD) was first identified, the honey bee (Apis mellifera) has warranted an increase of concern and attention.  As a result of factors, including stressful beekeeping methods at the industrial scale, chemical pollutants, and numerous diseases/infections, the honey bee population has been dramatically declining. I have apprenticed with a beekeeper, Dave Noble, at Stratford Ecological Center, who applies a healthy and sustainable system to his apiary, which consists of roughly fifty hives. Through hive management practices such as routine checks for mites and disease, queen marking, frame adjustment and honey extraction, I have been exposed to the inconceivable complexity that is the beehive. From their sophisticated communication via pheromones and movement to their dynamic life cycle that is interdependent to plants, the honey bees continue to enthrall me. Through this experience, I have acquired an abundance of knowledge, while having fostered a deep respect for the honey bee. As a result, I am capable of educating others about the superorganisms’ excellence and necessity--an imperative step toward saving the honey bees.