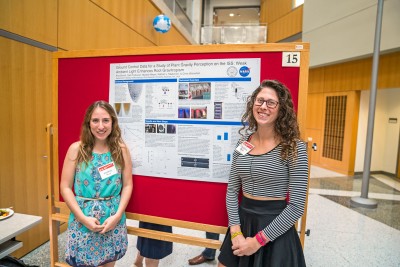 When a plant is rotated on its side, starch filled packets in root tip cells fall to the bottom of the cell, starting a process that results in the plant’s growth back downward. Mutant plants without starch in these packets still grow downward if rotated sideways, but unlike normal plants, don’t respond at different rates when stimulated at different angles, which suggests the mutants use a different signaling mechanism to reorient themselves. We are sending wild type and mutant plants to space to measure their rates of root reorientation when stimulated by different amounts of gravity in centrifuges, while also running ground experiments as a control group for comparison. By analyzing root growth response rates, we will determine whether the mutants’ gravity response system is linked or separate from the plastid sedimenting mechanism, how much this second system contributes to overall gravity response in plants, and the threshold amount of gravity mutant plants must have in order to grow downward.

Plants are sensitive to environmental cues like light direction and quality, touch, and gravity. They use these cues as inputs to direct their growth, allowing them to maximize their uptake of the energy, water, and mineral ions needed for growth and reproduction. Gravity is the only cue that is persistent in both magnitude and direction throughout the plant’s life, profoundly influencing the plant body throughout its lifecycle. Plants perceive gravity in part through the sedimentation of starch-filled plastids found in gravity sensing cells. Upon displacement from a vertical orientation, primary roots respond to gravity at a rate that varies depending on the angle of inclination of the root cap. More recently, we have shown that roots that lack starch-filled plastids show reduced gravitropism and rates of differential growth that do not depend on the angle of inclination. These results suggest an alternate mechanism of gravity perception not involving plastid sedimentation. We are planning to characterize this alternate mechanism by applying fractional g treatments to wild type (Col-0) and starchless (pgm-1) genotypes of Arabidopsis thaliana using centrifugation in the EMCS facility aboard the ISS.

In preparation for the flight fractional g experiments, we have carried out a number of ground control experiments that mirror the flight experiment protocol as closely as possible. Experiments will be initiated on orbit by hydrating seeds attached to a membrane, which is mounted atop blotter paper containing growth media, all of which is inside hardware known as a Seed Cassette. Growing seedlings on flight membranes, we found that roots elongate and respond to gravity at a slightly lower rate than on traditional agar media. To better control for these differences and the entire growth regime experienced by the seedlings, we designed and 3D-printed Seed Cassette holders. These cassette holders enhance the ability to record time-lapse images of growth under identical lighting and stimulation protocols as what the seedlings will experience in the EMCS on orbit. We will present data on gravitropism following phototropic reorientation for both wild-type and pgm-1 mutants, which will help in the interpretation of experimental data from flight.