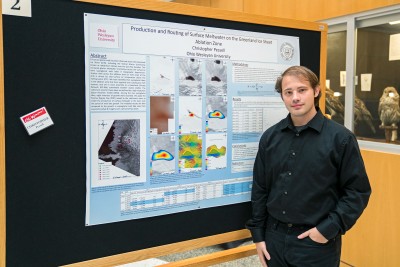 I am studying the growth of supraglacial lakes in the West Central ablation zone (or melting zone) of the Greenland Ice Sheet. The project’s goal was to better understand the relationship between surface air temperatures and the observed meltwater filling topographic depressions, forming lakes. The volumes of five lakes were calculated using Remote Sensing techniques. A positive degree day model was applied to temperature data to calculate the volume of meltwater produced at temperatures over 0°C. Among the five supraglacial lakes, eight instances of growth were recorded.

Enhanced glacial melt has been observed across the Greenland Ice Sheet (GrIS), including the Ilullisat Glacier (commonly known as Jakobshavn Isbrae) over the past few decades. This increased glacier meltwater channelizes across the surface to form supraglacial melt lakes in topographic depressions. Surface melt across the ablation zone (or melt zone) of the GrIS is driven by near-surface air temperature above the melting point (0°C). We have identified five supraglacial lakes in the ablation zone that form regularly over subsequent melt seasons, and are in close proximity to a Greenland Climate Network (GC-Net) automated weather station (AWS). The catchment area for these lakes are defined by a high-resolution digital elevation model (DEM). Among the five supraglacial lakes, eight instances of growth were recorded. We apply the Positive Degree Day (PDD) model to the catchment areas to model the production of surface meltwater in the basin over the period of melt lake growth. The modeled results are then compared to the growth in supraglacial melt lake sizes from acquired Landsat-8 imagery over a period of two years.