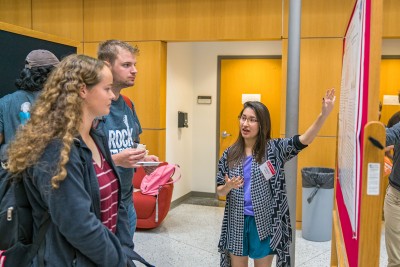 We are interested in genes that are important for the brain to respond to injury, cellular damage, or physiological stress. We are using a powerhouse organism in genetics, the fruit fly (Drosophila melanogaster), to identify genes that respond uniquely in the brain when the flies undergo physiological stress, such as exposure to high heat. This project may allow us to learn which genes may be helpful to stimulate in order to restore health to damaged or diseased brains, such as in Alzheimer disease or stroke.

Neurons, unlike most other cells in the body, do not divide or replicate and so most neurons are not replaced by new neurons if they are injured and/or die. Thus, it is likely that neurons use different mechanisms for survival than other non-neuronal cell types when a neuron is injured in order to promote cell viability. GSK-3β is an enzymatic regulator of cell metabolism and cell survival in nearly all eukaryotic cell types. We hypothesize that one alternate way neurons mitigate harmful effects is by regulating GSK-3β activity differentially than is found in other cell types. We have previously shown that changes in expression of the gene, hnRNP K, alter GSK-3β activity in the brains of fruit flies (Drosophila). We hypothesized that physiological insults would lead to changes in hnRNP K signaling in the brain that would then modulate GSK-3β signaling. To test this hypothesis, we used heat shock as a physiological stress and analyzed gene expression at various time points in brain and non-brain tissues for comparison. Our results show that acute heat shock causes variable gene expression of hnRNP K in the brain, but not does result in any substantial change in hnRNP K expression in non-brain tissue. In addition, there are robust changes in GSK-3β expression in the brain that are different to changes seen in non-brain tissue. These results, while preliminary, support our hypothesis that neuronal tissue responds to cellular stress differently than other tissue types, and that modulation of GSK-3β and hnRNP K expression may be key in this differential effect.