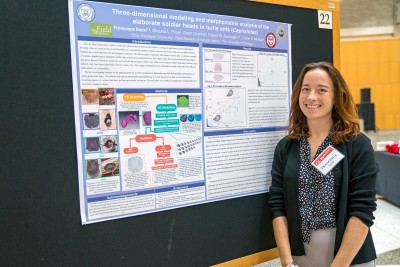 My goal is to see how ecology affects the evolution of adaptive forms and to better understand trait evolution. To do this, I am studying the differences in head shape of the soldier castes across a specific genus of ant, commonly known as turtle ants. We want to see why there is such extreme variation in head shape occurring even though all soldiers are performing the same task of blocking the colony’s nest entrances. Analyzing the anatomy of these heads from a 3D perspective may help us to define better characters to classify the types of head shapes we see in this genus.

Ants are ideal organisms to study evolutionary patterns due to their species richness, ecological significance, and morphological diversity. Ants are eusocial insects and therefore have specialized members of their colonies called castes that carry out different tasks. Soldiers are a caste that have the sole purpose of defending the colony. The diverse genus Cephalotes, also known as turtle ants, is a primary example of extreme morphological adaptation of the caste system. Many species of turtle ant soldiers have evolved heads that they physically use to block the entrances into their colonies. There are a variety of soldier head shapes that have been defined, with four types classified so far. For this study we wanted to quantify the variation in shape of soldier heads across Cephalotes, with the ultimate goal of understanding how soldier head shape evolves in Cephalotes. We used over 50 specimens of both soldiers and workers from the collections at the Field Museum of Natural History and scanned them using micro computed tomography (microCT) at the University of Chicago PaleoCT facility. Each specimen’s scans were then processed, cleaned and reconstructed into a three dimensional model using several programs. The head was separated from the model, and excess body parts that could potentially cause error, such as antenna, were removed from the head. Morphometric analysis was then performed on all soldier heads to assess shape variation. This was performed by placing a thousand points over the entire surface of each ant head, both with three-dimensional and two-dimensional samples. We then measured the difference in the location of the points across our samples through principal component analysis (PCA) to quantify head shape. From here we will use our morphological data and turtle ant phylogeny to investigate trait evolution.