Challenge Accepted: Analysis of Aggression and Hormone Levels in Carolina and House Wrens 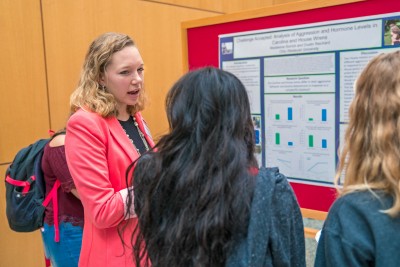 According to the Challenge Hypothesis (Wingfield et al, 1989), organisms are predicted to respond to aggressive interactions with increased plasma testosterone levels, which can, in turn, facilitate aggressive behaviors. In seasonally breeding species testosterone levels rise during the breeding season, but the hypothesis proposes that during aggressive interactions, the levels rise higher to a maximum. To determine if this applies to two species of wren, male Carolina (Thryothorus ludovicianus) and House (Troglodytes aedon) wrens were exposed to simulated territorial intrusions using a playback of conspecific song. The bird’s aggressive behaviors, such as dives and songs, as well as distance from the speaker were recorded throughout the trial. Fifteen minutes after the start of the playback, the male was caught as quickly as possible, and blood samples were taken from each bird. The plasma was extracted and will be used at a later date to analyze circulating hormone levels. A preliminary behavioral analysis suggests that House wrens sing more, approach more quickly, and are more active than Carolina wrens in response to playback. This data suggests that these two closely related species engage in very different aggressive behaviors and signaling. Whether differences exist in the testosterone levels remains to be seen. These behavioral differences may be due to the fact that Carolina wrens remain sedentary all year, whereas House wrens are migratory.