Parity Measurements in the 70Ga Nucleus 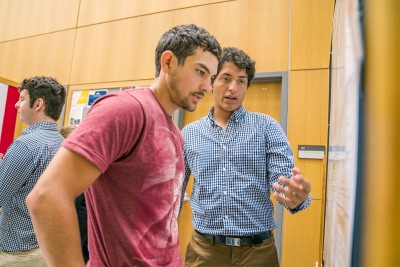 Rigorous studies in nuclear physics have led to important developments in a vast range of fields such as medicine with the magnetic resonance imaging technology (MRI), sources of energy with the implementation of nuclear power plants, and geology and archeology with the use of radiocarbon dating. Although there has been much progress in nuclear studies, many of the fundamental properties of the nucleus have yet to be fully comprehended, including the strong force that holds the nucleus together. An example of a nucleus in need of study is a neutron-rich isotope of gallium, 70Ga, about which relatively little is known. The focus of this research project is to gain a better understanding of the underlying structure of the 70Ga nucleus, which can then be used to test the most contemporary theoretical models that predict nuclear behavior.

The odd-odd 70Ga nucleus was studied at high spin after being produced at Florida State University using the 62Ni(14C, αpn) fusion-evaporation reaction at a beam energy of 50 MeV. The resulting g rays were detected in coincidence using an array of Compton-suppressed Ge detectors consisting of three Clover detectors and seven single-crystal detectors. The linear polarizations of eight g-ray transitions in 70Ga were measured by comparing their scattering yields within a Clover detector in the parallel and perpendicular directions relative to the beam axis, under the requirement that at least one other g ray in 70Ga was recorded by a single-crystal detector in the array.  As a result of these measurements, the parities of six states were confirmed and those of two other states were established for the first time based on a comparison of the experimental polarizations with the predicted ones determined from known spin assignments.  The resulting level spectrum of 70Ga shows both similarities and differences with those of its neighboring odd-odd Ga isotopes, as well as that predicted from previous shell-model calculations.