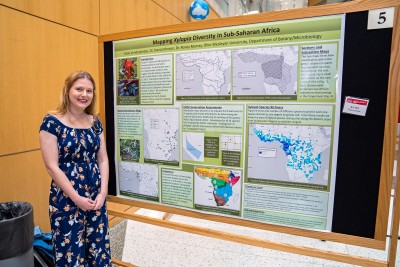 I have created maps using the mapping software ArcGIS to display the distribution and diversity of Xylopia, a genus of flowering plants found in tropical areas across the globe.  My maps focus on the forty-five Xylopia species of sub-Saharan Africa.  These maps can be used to develop a better understanding of the evolution and classification of the genus, and develop conservation plans.

Xylopia is a genus of flowering plant in the family Annonaceae.  Its distribution spans the Neotropics, sub-Saharan Africa, Madagascar, tropical Asia, and Australasia east to Fiji.  Africa is unique in that it is the only continent where all sections of Xylopia are represented. Researchers have compiled geographic data from plant collections going back over a hundred years to find the locations of the 45 Xylopia species in sub-Saharan Africa.  Using this geographic data in the map-making software ArcGIS, I created maps to help analyze the distribution and diversity of Xylopia.  Basic distribution maps, identifying the geographic locations of the plant collections, were prepared for all African species. Other maps show the distributions of sections and subsections within the genus.  These maps enable researchers to study the relationships between characteristics of the plants and their geographic location.  The distribution maps also enabled us to evaluate the threatened levels of 24 species with limited distributions by determining the Extent of Occurrence (EOO) and Area of Occupancy (AOO) as part of the procedure used in IUCN conservation assessments.  A species richness map, in which the number of species was plotted for each one degree latitude by one degree longitude cell, shows the pattern for Xylopia on the continent.  From these results we now know that the area of highest species richness lies along the Atlantic coast from southeastern Nigeria to northern Angola.  An endemism map communicates how many Xylopia species are endemic, or defined to a certain geographic location.  Using newly defined biogeographic regions, we found the area with the highest number of species to be the lowland wet forest Congolian Region containing nearly 47% of African Xylopia species.  Using maps to portray the biogeographical data of African Xylopia may help develop a better understanding of this genus in regards to characteristics and classification, as well as for evaluating extinction risk.