Analysis of Cell Division and Development in C. elegans and Other Nematodes 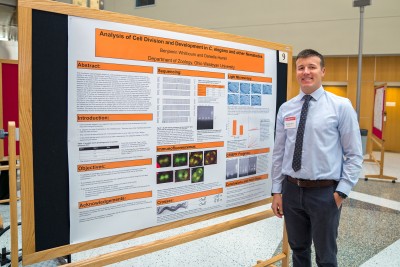 The study of roundworms can be very beneficial to understand the complex process of animal development. One roundworm, Caenorhabditis elegans, is well described and can be used as a comparison for other animals. We are comparing four roundworms to C. elegans on a phenotypic and genetic level, discovering that we have at least one previously undescribed species. We have identified that several characteristics essential for establishing the anterior (head) to posterior (tail) axis in C. elegans do not occur in these worms. This research will provide insight into early development amongst roundworms and more distant species.

The roundworm Caenorhabditis elegans is a well-established model organism used for wide-ranging studies in cell biology, neurobiology, ecology and more. C. elegans is amongst millions of species, both described and undescribed, in the phylum Nematoda. We describe our progress on characterizing four nematodes isolated in Ohio and the Florida Everglades, some of which could be previously undescribed species. In this research we have studied the nematodes on a genetic level using select nuclear and mitochondrial genes. DNA sequence analysis demonstrated that we have been studying three distinct species in the genus Oscheius. Furthermore, we conducted phenotypic analysis of the worms and embryos using light microscopy and immunofluorescence. We found some interesting differences from C. elegans with regards to developmental patterns: C. elegans has distinctly asymmetric early cell divisions that are critical for normal development, but in the isolated worms some of these asymmetries were less pronounced. To further our characterization of these worms we are hoping to generate targeted DNA mutations and open new avenues for our research. Genome editing through CRISPR is an important area of research in many model organisms as it allows for the creation of precise DNA deletions or additions that can be very helpful in further characterizing undescribed species. We set out to develop tools and techniques for CRISPR with the goal of inactivating a collagen gene. So far we have attempted to amplify and determine the DNA sequence of a collagen gene in our worms, but more work is needed. In the future we hope to use these techniques to work with polarity genes and further address anterior and posterior formation. We believe the comparative studies like the ones described will enable us to obtain a better understanding of early development and developmental patterns in worms as well as other animals.