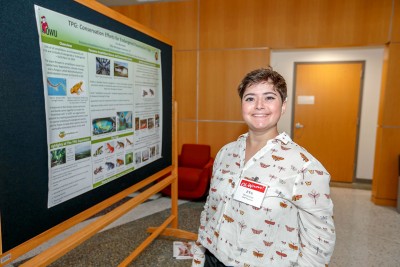 Used Theory-to-Practice Grant to spend summer in Panama. Volunteered at Amphibian Rescue and Conservation Center through the Smithsonian Tropical Research Institute, learning about conservation of endangered frog species. Worked in center with captive breeding population of frogs extinct in the wild. Learned about daily care needed to keep these frogs alive and happy, and learned from lots of important scientists.

In 2004, the International Union for Conservation of Nature (IUCN) updated their Red List of Threatened Species to indicate that 32% of amphibians are threatened, and 21% of amphibians are Critically Endangered or Endangered. The Red List also indicated that 61% of recorded amphibian species are declining, 38.3% are stable, and only 0.69% are increasing. This decline can be attributed to many causes working in tandem, including human exploitation, habitat loss, global change, and a deadly fungus called Batrachochytrium dendrobatidis (Bd or Chytrid). Chytrid is known as a frog killing plague and is highly contagious, spreading through streams and water sources. It was first noticed in Panama in 1996, when scientists realized that the famous Panamanian Golden Frog (Atelopus zeteki) was declining, and since then Chytrid has been found across all of Panama, and the Golden Frog can no longer be seen in the wild.

In response to the threat against amphibians, the Smithsonian and other scientific communities decided to create an “ark” for the amphibians, and safeguard the most endangered species in Panama by creating captive breeding colonies. The scientists collected members of 9 of the most endangered species from Panama and moved them into the completely quarantined center in the hopes that one day they can be reintroduced to the wild.

Thanks to funding from OWU, I was able to spend my summer volunteering at the Amphibian Rescue Center in Panama and learning about the efforts to protect the frogs of Panama. I helped with the daily husbandry of the highly endangered frogs, learning about the care that is needed for these specific and sensitive species, and was able to observe and work with some of the leading scientists fighting every day to protect these frog species.