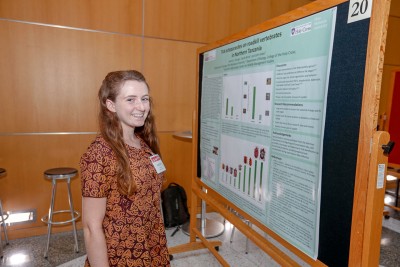 Ticks are parasites that feed on other organisms’ blood, and they can transfer diseases to humans and animals. We looked for ticks on roadkill vertebrates, which allowed many different types of animals to be examined without stressing out or harming live animals. The goal of this study is to better understand what kind of ticks are found in Northern Tanzania, what types of animals those ticks normally feed on, and which tick-borne diseases people and animals may be at risk for.

Of all the arthropod ectoparasites, ticks transmit the widest range of both human and animal pathogens. To examine tick species prevalence and potential impacts, roadkill vertebrates were assessed for ticks along a 75km stretch of the Karatu-Makuyuni- Burunge road in the Tarangire-Manyara Ecosystem for ten days. In total, 164 ticks (9 species, 3 genera) were collected from 11 out of 49 (22.4%) inspected roadkill vertebrates. A significantly higher proportion of mammals (45%) had ticks than reptiles (25%) and birds (4%). Domestic animals (75%) more often had ticks than wild animals (12.2%). Medium-sized vertebrates (75%) and larger vertebrates (66.7%) were more likely to carry ticks than smaller vertebrates (7.9%). Rhipicephalus was the most abundant (n=129) genus, and Rh. sanguineus and Rh. appendiculatus were the most prevalent tick species (4 hosts). Plains zebra had the largest load (n=97) while dogs had the highest species richness (n=7). All tick species collected (Amblyomma sp., Haemaphysalis sp., Rhipicephalus spp.) have been known to feed on humans. Diseases that pose a large threat to both public and animal health, namely tick typhus, anaplasmosis, babesiosis, heartwater and East Coast Fever, were among the potential diseases the collected species could transmit. These results stress the importance of cautious, immediate and proper removal of roadkill. While long-term studies are needed and screening ticks for pathogens is recommended for future studies, this study demonstrated the potential roadkill ecology has for furthering the understanding of tick ecology and disease epidemiology.