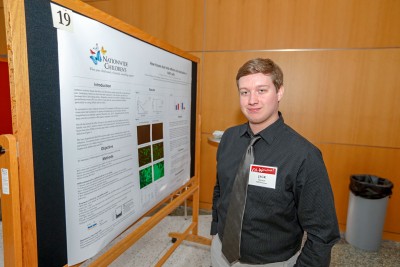 HDM has been shown to protect mice from viral infections. Our lab wanted to confirm this was from an immune response to the HDM and not a difference in the epithelial cells (the first cells the virus would infect). We used HAE cells in vitro to isolate and control the condition of the cells and easily monitor viral spread and barrier function.

Asthma is a chronic disease that affects over 200 million people around the world and has no cure. Increasing evidence has shown that early respiratory viral infection can lead to an increased risk of developing asthma. In a study of patients from the H1N1 pandemic of 2009, it was found that those with asthma had a lower mortality rate than those whithout. Our lab has shown that mice that receive house dust mite (HDM) intranasally before a normally lethal dose of respiratory virus (Sendai virus) survive the infection. This experiment aims to study the effect of HDM on viral replication in human airway epithelial cells (HAE) in vitro. The objective was to determine if HDM affects the epithelial binding and replication of respiratory virus. HAE cells were infected in vitro with SeV or respitory syncytial virus (RSV). Doing so isolates the exposed cells from any circulating immune cell interference in the viral replication. The strains of RSV and SeV used express a green fluorescent protein (GFP) and allow the viral spread to be monitored with a fluorescence microscope. The cells are given a dosage of 10μg HDM, which is left on the cells for four hours and then removed. The dose of HDM was optimized in a previous experiment conducted this summer. This treatment is given for four days and on day six the cells are infected with either 400 plaque forming units (pfu) of RSV or 5000 pfu of SeV. The viral spread is monitored for three days after the initial infection. The barrier resistance and tight junctions were also analyzed before and after the three days of infection. HDM does not have a significant effect on viral replication (p>0.05) between the level of fluorescent. However, barrier resistance does show a significant difference (p<0.05) between RSV and HDM-RSV. The data showed HDM-RSV had a lower barrier resistance than RSV alone. These preliminary results indicate that the epithelial cells are being effected by HDM, but not in a way that affected viral replication.