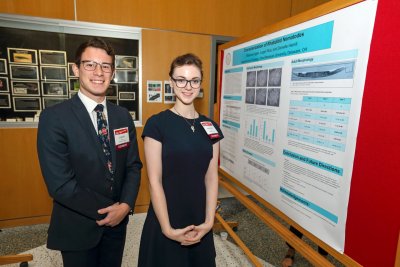 Nematodes are small worms used throughout the world for study and research due to their abundance and importance in medicine and agriculture, among other things. Caenorhabditis elegans is the most studied species of nematode, and has lead to great scientific advancements. While there are thousands of known nematode species, it’s been predicted hundreds of thousand have yet to be described. We believe the study of these other nematode species will further our knowledge of animal biology. Our research focused on the characterization of Rhabditid nematodes isolated in Ohio and Florida by previous students in the lab. We focused on three worm groups, separated into “types” by genetic and molecular analysis. Based on the 18s rDNA sequence, type 1 worms match the described species Oscheius myriophila. We found that type 2 worms at this locus differ in their DNA sequence from O. myriophila by approximately 2%, and type 3 worms were about 1% different from both type 1 and type 2. We also observed the early embryonic development of these worms, which further supported their classification as part of the genus Oscheius. These embryonic phenotypes are being further characterized. We performed mating crosses between type 1 (O. myriophila) and type 2 worms. It appeared the worms were unable to mate and produce hybrid offspring, further supporting type 2 worms being a different species than O. myriophila. We measured and compared anatomical morphology between all three worm types. Differences in adult hermaphrodite morphology suggested type 2 and type 3 worms are both distinct and previously undescribed species. While there is still work to be done in characterizing these species fully, our work has furthered our understanding of this unique and important genus of nematodes.

Our lab believes we have found a new species of nematode, a microscopic worm. While, the study of the C. elegans nematode has lead to great scientific advancements, we believe the study of other nematode species would further our knowledge of animal biology. We are comparing data we collect to published information to fully describe this new species.