Lifetimes Within the 73Se Nucleus 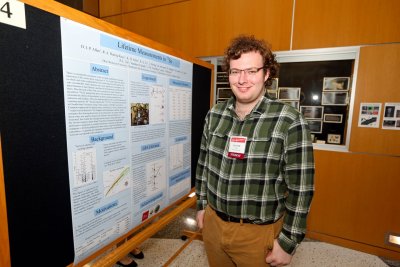 There is considerable uncertainty in the literature regarding the cascade intensities of the various decay sequences in 73Se. In particular, the degree to which each state is populated by direct and unknown side feeding can vary considerably. Such variations can cause significant uncertainty in the determination of state lifetimes and thus the transition rates inferred from them. Thus the goal of this work was to measure as many lifetimes as possible in 73Se by gating from above the transition of interest in order to eliminate the effects of uncertainties in direct feeding intensities and unknown side feeding.  This was made possible by the excellent gamma-ray counting statistics for 73Se provided by the 14C(62Ni, 3n) reaction performed at Florida State University using a beam energy of 50 MeV and with a Compton-suppressed Ge detector array consisting of 3 Clover detectors and 7 single-crystal detectors. The Doppler-shift attenuation method, which compares the slowing-down time of recoiling nuclei in a target with their decay time, was used to measure all lifetimes. Seven lifetimes were measured, four within the strongest positive-parity band and three within the favored negative-parity band. From these lifetimes the quadrupole deformation parameter beta_2 could be inferred as a function of spin and compared with those predicted for these states using total Routhian surface calculations. In general, the variations observed in the experimental values were not reproduced in the calculations.

The nucleus of an atom is not always spherical. Often it is shaped like either a frisbee disc or an American football. We can indirectly infer these shapes by measuring the time that it takes for a nucleus to relax from higher to lower energy. The goal of my research was to infer the shape of a particular isotope of selenium (Se-73) when it rotates rapidly.