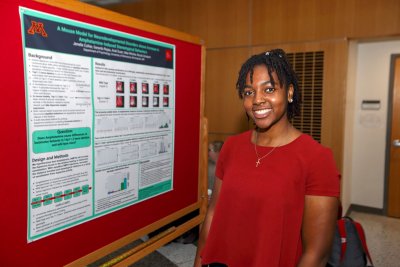 Neurodevelopmental disorders, especially autism spectrum disorders, are associated with multiple etiological mechanisms and symptom presentations. However, a core symptom across autism-spectrum disorders are repetitive locomotor behaviors. Autism is a highly genetic disorder, and one of the most frequently associated genetic variants with autism is chromosome 16p11.2 hemi-deletion. More than 30 percent of carriers have an autism diagnosis. In a mouse model of 16p11.2 hemi-deletion, gene expression and protein levels related to dopaminergic function in the striatum were disrupted. The striatum regulates locomotor behavior via dopaminergic input. This suggests that repetitive behaviors in autism may be driven by altered dopamine activity in the striatum. A well-validated technique for evaluating striatal dopamine function and locomotor behavior in mice is amphetamine-induced locomotor sensitization, which we tested in 16p11.2 hemi-deletion model mice. In response to daily amphetamine, wildtype mice increased their distance traveled, but the increase was less prominent in the 16p11.2 del mice. Instead, the 16p11.2 del mice performed stereotyped rotations, which was not seen in wildtypes. These data suggests a difference in sensitivity to dopamine stimulation in 16p11.2 mice that promotes repetitive behavior, supporting the possibility of dopaminergic dysregulation in the striatum in autism-related genotypes.

Neurodevelopmental disorders such as Autism Spectrum Disorder are significant for their genetic variant risk factors and family inheritance genes as mechanisms for development. In this project, we have used mice to model a well-associated genetic risk factor with Autism Spectrum Disorder, chromosome 16p11.2 hemi-deletion. This variant has been shown to alter areas of the brain involved in reward and movement. Our goal was to see how amphetamine, a drug that elevates dopamine in the brain, affects dopaminergic activity and how that activity leads to the development of repetitive behaviors in 16p11.2 hemi-deletion and wild-type mice.