Lifetime Measurements in 74As 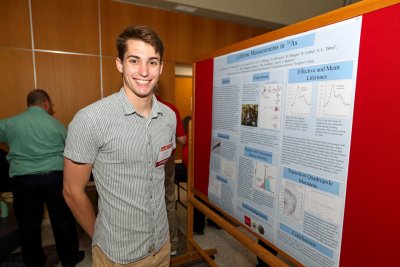 Most odd-odd arsenic (As) isotopes share a characteristic oscillating pattern in the energy differences between adjacent states in their positive-parity bands, with the even (odd) spin states lying relatively higher (lower) in energy than the odd (even) ones at high spin. An exception is 74As, which shows a phase in the pattern that is exactly opposite to the established trend. A recent study suggested that this irregular pattern results from an underlying triaxial shape with a particular degree of deformation. Lifetime measurements could be used as an independent check of this assertion since deformations can be inferred from them. However, so far lifetimes of high-spin states have not been measured in 74As. Thus the goal of this work was to measure as many lifetimes as possible in 74As using the Doppler-shift attenuation method in order to test the existing interpretation of its positive-parity structure. High-spin states in 74As were populated using the 14C(62Ni, pn) reaction at 50 MeV performed at Florida State University. Gamma decays were measured in coincidence using a Compton-suppressed array of 3 Clover detectors and 7 single-crystal detectors. Three lifetimes were measured within the positive-parity band and used to infer the quadrupole deformation parameter β2 as a function of spin. The experimental β2 values were then compared with theoretical ones extracted from total Routhian surface (TRS) calculations. Although the magnitudes of two experimental values are in good agreement with the corresponding theoretical ones, the general trend of the experimental deformations with spin are not reproduced by the TRS calculations. However, triaxial shapes appear to be favored at high spin.

Most atomic nuclei show very similar behaviors when compared with those of their nearest (in mass) neighbors.  However, this is not the case with the arsenic-74 isotope, which shows a very different pattern in its decay energies than other arsenic isotopes when it relaxes from a high rotation rate to a lower one. This study seeks to understand why it might be different by probing its shape through a measurement of its decay times.