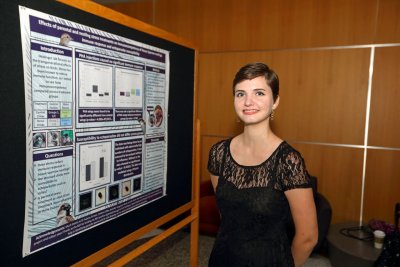 In the current experiment at Heidinger lab at North Dakota State University, stressing is done on both adult birds and nestling House Sparrows (Passer domesticus), with controls for both groups. As such there are four total groups: stressed parents-stressed chicks (S/S), stressed parents-control chicks (S/C), control parents-stressed chicks (C/S), and control parents-control chicks (C/C). Since stress has been known to reduce the immune function of certain species, it was tested to see if immunocompetency differs across treatment groups. First, ten-day old chicks were combed for ectoparasites in order to determine if chicks in certain groups were more susceptible to parasites. Second, ten-day old chicks also had their patagium thickness measured using Phytohemagglutinin (PHA) and phosphate-buffered saline (PBS) injections. The data showed that PHA wings were thicker than PBS wings, but there was no significant difference between PHA wings across treatment groups. Chick treatment had no effect, but there was a weak trend toward parental stress causing higher immune reaction in chicks. Preliminary data showed that S/C chicks may be more susceptible to ectoparasites, but this data was being skewed by one individual with an unusually high number of parasites. When this individual was removed from the data, there was no difference between ectoparasite susceptibility across treatment groups. It was concluded that there was no difference in immunocompetency across treatment groups. More data collected during a year with better weather and less mortality among nestlings may show better results.

The Heidinger lab at North Dakota State University studies the effects of stress on house sparrows. In the current experiment, both parents and chicks are being stressed. Since stress has been known to reduce immune function, I tested to see how immune function compared between house sparrow nestlings of different treatment groups. I did this in two ways; firstly, at 10 days old the chicks are combed for parasites in order to determine if certain groups are more susceptible to them. Second, at 10 days old the chicks’ wing web thickness is measured and then injected with PHA, a solution that evokes an immune response. Approximately 24 hours later, the wing was remeasured in order to measure swelling (the immune response).