Artificial Intelligence for the Board Game “Eurorails” 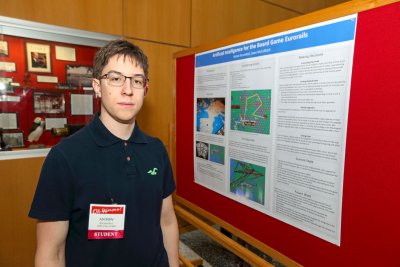 Eurorails is a board game where players control locomotives that move around a board on self-placed tracks and transport goods between cities. Each player has a set of demand cards that show what goods can be delivered with corresponding profits; every delivery, new demand cards are drawn to replace old ones. Players can place track between tiles at varying costs to make paths between cities. The goal of the game is to make a certain amount of total money and connect 7 of the 8 major cities together with placed track. Players compete to reach this goal first and win the game.

This research aims to make an AI player that attempts to win in as few turns as possible. The computer player moves by first generating all combinations of moves that it can perform in its current state. It then discards any plans that are invalid or impossible, and picks the set of moves that maximizes profit per turn. “Profit per turn” for a plan is calculated based on total profit made on that plan, as well as the total money spent on tracks and the total moves taken to complete it. The specific tracks to place and path to take are calculated with the A* algorithm, with movement cost as a heuristic. When it has enough money to do so, the AI also tries to upgrade its locomotive to improve its cargo or speed. As it approaches a certain threshold of money, the computer player preemptively connects major cities with track to secure a faster victory. In one data set, the current iteration of this AI manages to win in 60 turns; faster than some experienced human players.

This research aims to create an intelligent program to play Eurorails and win in as few turns as possible. Eurorails is a board game where players build track and sell goods to cities on a map of Europe. The goal of Eurorails is to be the first player to reach a certain amount of money. This program works by looking at a list of potential plans of actions that can be done, then picking the one that makes the most profit per turn.