Stress and Immunity in House Wrens 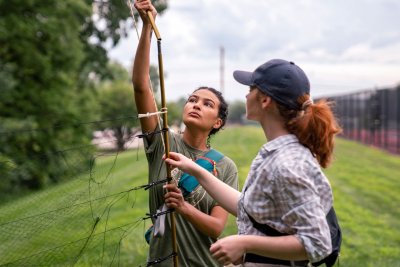 All organisms have a finite energy budget, and changes in the environment often affect how energy is allocated between different physiological processes. Chronic stress is generally understood to have a suppressive effect on the immune system, however, some evidence suggests that short term stress has the opposite effect. For example, exposure to a predator may result in more energy being allocated to the immune system in anticipation of an injury. We tested this hypothesis in house wrens (Troglodytes aedon) by presenting females with 3-6 day old nestlings with a model of a black rat snake, a common nest predator. The model was left on a nest box for five minutes, and the behavior of the female was recorded. The female was then caught within 15 minutes post trial, and a blood sample was taken and used to measure constitutive immunity. These samples were compared to females that  were not exposed  to the snake model, but at the same nesting stage. Previous data from 2018 were consistent with our hypothesis that a short term stressor would enhance immune function. However, data collected this summer showed no clear effect of the short term stressor, which suggests that another factor, such as environmental variation, is also affecting the immune response.

Everyone knows that we get sick more often when we are stressed. However, some evidence suggests that different types of stress have different effects on the immune system. Our study examines short term stress by presenting house wrens with a fake predator at their nest box and collecting blood samples to test whether the encounter with the predator affects their immune function.