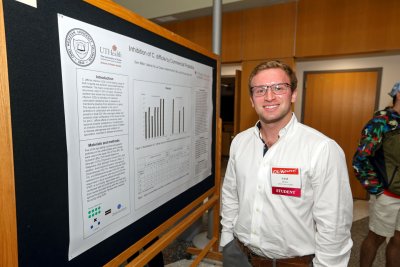 C. difficile infection (CDI) is the leading cause of both hospital and antibiotic associated diarrhea worldwide. The major complication of CDI is recurrence, seen in 25% of cases. A large percentage of these cases with recurrence are not cured by antibiotics because of presence of spores in the gut which germinate when antibiotics are withdrawn leading to further recurrences. C. difficile spores are resistant to extreme temperatures and from usual alcohol disinfectants used in hospitals. Currently there is little research into the effects of commercial probiotics and their effects on CDI. In this study we looked at five popular commercial probiotics and their impact on inhibition of sporulation of two different strains of fully virulent and toxigenic C. difficile. All combinations of probiotic and strain were plated along with the necessary positive and negative controls and were grown for a week to allow spores to form. After the week incubation the samples were placed in a hot water bath to kill any remaining bacteria so the spore counts would be accurate for the week of growth. Then each sample was plated at 4 dilutions: 1x, 10x, 100x, and 1000x and were incubated for 48 hours to allow for visible spores to form on the plates. Counts were then taken of each plate and compared to the controls. PCR was also run on samples with spores to ensure that they were C. difficile and not spores of the probiotics. We found that both Bio-K Plus and Bio Schwartz probiotics reduced the C. difficile spore counts from their maximum strength to no more than two spores for any given dilution. The rest of the probiotics had varying effects on spore counts, none of which were as effective as the two previously stated. We concluded that available probiotics differ in their ability to prevent sporulation of C. difficile, and potential value in preventing recurrence of CDI.

Antibiotics not only kill the bacterial infection that your doctor identified, it also kills the bacteria in your gut that helps you digest food. This leaves your gut open to antibiotic resistant bacteria which is bad for your health. C. diff is one of these kinds of bacteria which releases a toxin in your gut that causes diarrhea. We looked at if commercial probiotics were able to stop C. diff infection and our conclusion was that there were varying effects ranging from effective to ineffective.