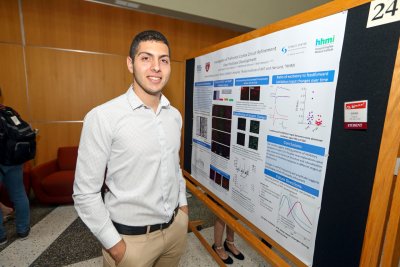 Pre-frontal cortex is involved in numerous important functions with high complexity such as complex planning, cognitive behavior, personality expression, decision making and moderation of social behavior. Despite of its high complexity and involvement in diseases like schizophrenia, the refinement of prefrontal cortex has not been firmly researched. It is well known that inhibitory neurons are important as they regulate neural activity and it is critical to investigate and learn about the development of different inhibitory neurons in different layers of the prefrontal cortex. To do that, we have used immunohistochemistry on the rostral coronal mouse brain sections through development (P10, P15, P49, P120). These ages were determined by collecting/analyzing the electrophysiological data to see the critical timepoints of pruning in the prefrontal cortex of mouse. The brain sections were prepared as 14 microns by using a cryostat. To investigate parvalbumin (PV) interneurons, synaptotagmin-2 antibody was used at 1:1000 concentration which labels the synapses of PV interneurons (it is a pre-synaptic marker). Along with synaptotagmin antibody, vesicular GABA transporter (VGAT) antibody was used at 1:500 concentration which labels all the inhibitory synapses (it is a pre-synaptic marker). To investigate myelination over development of pre-frontal cortex, basic myelin protein (MBP) antibody was used at 1:1000 concentration and neural/glial antigen-2 (NG2) primary antibodies were used. Myelination is a significant illustration of maturation and it is critical to be able to know at what point it takes place. By using MBP, we targeted myelinating oligodendrocytes and with NG2, we targeted precursor oligodendrocytes. The images of medial, dorsolateral and ventrolateral prefrontal cortex were taken at layers 1 and ⅔ with a magnification of 60x with confocal microscopy. The is analyzed using CellProfiler and MATLAB/R programming, and our preliminary data suggests critical changing patterns of all inhibitory neurons in layers 1 and 2-3 as well as PV a different changing pattern of PV  interneuron synapses,, which are one of the three inhibitory neuron subsets (interneurons in PFC are classified according to calcium-binding protein they contain. The other two subsets are calbindin and calretinin interneurons). Our preliminary results also show possible new explanations in terms of structure of inhibitory synapses over development.

Prefrontal Cortex of the brain is responsible for significant complex functions such as planning, social behavior, personality expression and decision making and a thorough investigation of the development of this important brain region can lead to new targets and explanations to developmental diseases, like schizophrenia. We investigated changing patterns of different types of inhibitory synapses as well as myelination at the prefrontal cortex with immunohistochemistry. Our preliminary results indicate critical developmental stages for inhibitory synapses as well as myelination.