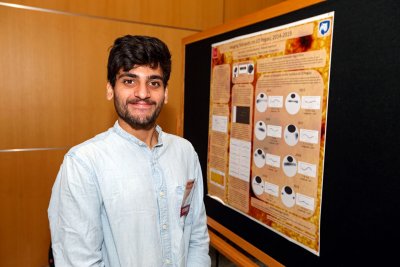 LO Pegasi is a K8 main-sequence star located 81.7 light years away. It is an ultrafast rotator with a period of 10.153 hours. This short rotational period makes LO Pegasi magnetically very active, with Doppler imaging suggesting the presence of much larger starspots on its surface than those on the Sun. As rotation brings these dark spots into and out of view, the star’s overall brightness varies, becoming dimmer when the spots are visible. We acquired CCD images of LO Pegasi through standard photometric B, V, R, and I filters, then analyzed them using differential photometry. The data thus gathered were processed via the Light-curve Inversion algorithm to create surface models of LO Pegasi. We present a series of models made using data acquired from 2014 to 2019 in order to study how the spots on its surface are changing with time.

The purpose of this project is to better understand the magnetic activity of stars including our own sun. To do so, we are studying the star LO Pegasi, located more than 80 light years away in the Pegasus constellation. We are observing its star spots which are cool, dark, magnetically active regions on the star’s surface, formed due to a strong magnetic field generated within the star. We are observing changes in brightness of the star with time to determine how spotted it is and based on data gathered from 2014-2019, we attempt to create tentative models of the star’s surface depicting possible spot locations.