An Analysis of Neurofibromatosis Type 1 in Children 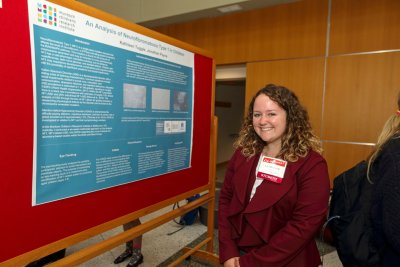 Neurofibromatosis type 1 is a single-gene mutation disorder that affects the level of neurofibromin, a GTPase-activating protein involved in the RAS/MAPK pathway. NF1 is either inherited or occurs spontaneously. Children with NF1 experience neurodevelopmental delays and commonly develop physical symptoms such as neurofibromas and optic gliomas. Over the course of six weeks, I conducted a multimodal approach to the analysis of NF1 at the Murdoch Children’s Research Institute in Melbourne, Victoria, Australia. During this time, I worked in both clinical and laboratory research settings via pediatric observations, literature reviews, data entry, and with stem-cells. NF1-associated autism spectrum disorder and attention-deficit/hyperactivity disorder was a pertinent area of focus as both ASD and ADHD are widely encompassing disorders with a variety of physiological roots. Additionally, ASD and ADHD have higher occurrence rates in NF1 when compared to the general population. Through the lens of NF1, the affected biological pathways and social behaviors are analyzed to best characterize and treat children as early as possible. Current clinical studies at the institution I assisted with include psychometrics, pragmatic language, audiology-RCT, and gender dysphoria. In the associated Victorian Clinical Genetics Services Laboratory, I worked closely with a PhD student to grow, split, freeze, and image patient-derived pluripotent stem cells. The project involves five children with NF1 and five matched controls. Their stem cells will undergo neural differentiation for future mechanistic analysis of the disorder. This experience demonstrated the vitality of multimodal research with direct clinical applications.

Neurofibromatosis type 1 is a disorder that impairs children’s intellectual and social abilities with long-term implications. The goal of the many studies at the Murdoch Children’s Research Institute Brain and Mind Group is to increase our understanding of NF1 along with other common disorders, such as autism spectrum disorder and attention-deficit/hyperactivity disorder, in order to personalize patient treatment and increase early identification. My clinical and laboratory research involvements provided widespread insight into the biological, mental, and social problems related to these disorders and the most appropriate treatments for effective intervention.