I spent the summer doing a remote project that analyzed the various songs of Carolina wrens (Thryothorus ludovicianus) with guidance from Dr Dustin Reichard and Dr Elizabeth Schultz.

Songbirds typically sing to attract mates and repel rivals during the breeding season. A general rule of songbirds is that species within the tropics are known to sing year round while temperate species, whose breeding time is cut much shorter by seasonal changes, sing only during the spring and summer months of the breeding season. Carolina wrens (Thryothorus ludovicianus) are an exception to this rule as they sing year round despite having a range from Mexico all the way to Canada.

Despite this unique behavior, very little research has been done into their song structure, variation, or evolution. In fact, while we currently believe Carolina wrens to follow other rules of songbird etiquette, including that most temperate species have lost female song, we have no research to definitively conclude this. The irregularity of Carolina wren singing behavior warranted a closer look into the structure and differences between their breeding and non-breeding melodies. In this study, I hypothesize that Carolina wren songs during the breeding season would be more complex and longer in length than non-breeding songs in order for males to more effectively attract potential mates.

I collected songs from Thryothorus ludovicianus recorded and deposited into the public databases eBird, the Macaulay Library, the Florida Museum of Natural History, and Xeno Canto over multiple decades (1950-2020). I screened the recordings for clarity and used 601 songs for this study. I defined breeding season songs as being recorded between March and August, while non-breeding songs were defined from September to February. There were 307 and 294 of each, respectively.

Date, year, and latitude data was also collected from the above databases. Using Raven Pro analysis software, I measured the length, complexity, and frequency range of each recording. Complexity encompasses a variety of measures and a higher complexity was expected to have a higher frequency range, greater entropy, a higher trill rate (number of notes per time), a higher number of syllables, or a higher number of notes within each syllable. Using detection tools in Raven Pro, best quality song in each recording was able to be chosen for data collection. For recordings with multiple songs, one song was chosen from each distinctive type for data collection. Detection tools also allowed for more accurate measures of the start and end time of each song. Peak Frequency Contour (PFC) Minimum and Maximum, number of inflection points, maximum entropy, number of notes, and number of syllables were also measured.

R and R Studio software analysis was used to compare the breeding and non-breeding groups. Bayesian and parametric approaches were used to determine the effects between year and latitude with each measurement. 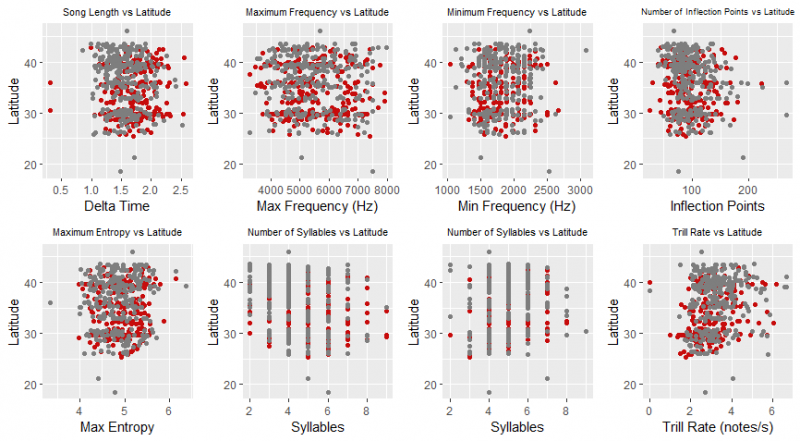 Figure 4: Correlation graphs between latitude and the measures of song length, complexity, and frequency range. Latitude was shown to have correlations with delta time, frequency minimum, number of inflection points, number of syllables, notes per syllable, and  trill rate. When graphed, these relationships are not seen very strongly, suggesting the effect of latitude on song variation is extremely minimal.

A series of linear mixed models taking latitude into consideration significant difference between breeding and non-breeding data for delta time of song, number of syllables per song, and trill rate of song (Table 1).

Overall, breeding male wrens sang longer songs and with more syllables but at a slower rate. The results for measures of complexity were more conflicting. While breeding song had more syllables per song, it did not differ significantly with non-breeding song in frequency measures, number of notes per syllable, number of inflection points, or maximum entropy. Conversely, non-breeding song had higher trill rates. In many species, breeding songs are complex in order to distinguish males from each other when females choose mates. These results suggest that this is not a factor in mate choice for Carolina wrens, and males do not vary considerably in song. The longer and slower songs during the breeding season may be indicative of males attempting to increase their chances of being heard by a potential partner rather than trying to sing as intricately as possible.

The minor correlation between latitude and song measurements could suggest that wren songs have differentiated as they are learned and spread across different geographic ranges, though not considerably. Year of recording not having an effect was surprising as it suggests that Carolina wrens have maintained consistent songs for over 70 years without major variation or evolution in song preference.

Carolina wrens are an extremely under researched species despite their extensive range, pervasiveness, and unique behavior. I believe the next steps for this project would be to dive deeper into wren singing and mating behavior. This project used songs collected across the United States and from many different databases where each song was from a different bird. Repeating this project using the same birds in order to see how their specific songs change from the breeding season to the non-breeding season is an important next step. Future research should also investigate why males do not increase song complexity when potentially attracting mates and determine the exact function of their song during the non-breeding season. Hormone levels in male Carolina wrens could also be interesting considering most male song is linked with increases and decreases in testosterone during the breeding and non-breeding seasons, but perhaps increased hormone production in other body regions compensates during the non-breeding season. I think it would also be worthwhile to more closely examine female behavior and test female ability to produce song once and for all.

Special thanks to Dr Dustin Reichard and Dr Elizabeth Schultz for their advice and guidance throughout the summer.

Thanks to The Macaulay Library at the Cornell Lab of Ornithology, Xeno Canto, and Dr Thomas Webber and the Florida Museum of Natural History for granting use to their bird song collections for this project.

The unique aspect of Carolina wren songs is that they sing all year round, unlike most temperate songbirds that only sing during the breeding season. And while we currently assume that only male wrens sing, we don't know for sure that the females do not.

Listen to their songs