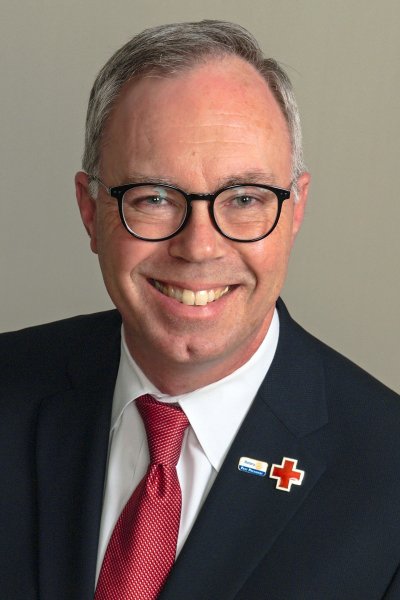 Ken Robinson started with the American Red Cross in Buffalo, NY volunteering at blood drives at his highschool beginning in 1989. He continued his involvement by organizing blood drives for the Red Crossduring his four years at Ohio Wesleyan where he majored in Religion and History. Shortly after graduation in 1995, Ken was hired by the Toledo Chapter as a volunteer specialist and progressed through other positions including branch director, Director of Programs and Services, and Chief Operating Officer while still managing all service delivery activities in a regularly growing territory.

A Certified Disaster Program Manager with a 25+ year tenure on staff, Ken is one of the longest serving Disaster Services leaders in the country. He has supported dozens of disaster operations in the field and from the national headquarters where he also led national projects around service delivery organization and management dividing his time for three years between Ohio and Washington, DC. His response experience includes operational support or leadership roles in Hurricanes Dennis, Katrina, Rita, Wilma, Harvey, Irma, Maria, deadly tornadoes in Northwest Ohio, and mass casualty events such as aviation disasters and mass shootings. In 2021, Ken was deployed to two separate mass casualty events caused by devastating flooding in Kentucky and Tennessee over the course of 12 weeks.

Ken now serves as Regional Disaster Officer for the Central &amp; Southern Ohio Region and leads a team of 17 paid staff and approximately 700 volunteers providing services in 47 counties in Ohio, northern Kentucky and Southeast Indiana ranging from emergency response to natural and man-made disasters of all kinds, a recovery program to provide casework, health, mental health, and spiritual care support to those affected by disasters, and preparedness activities including safety education and smoke alarm installations to make families safer and more resilient. In short, his team works to save lives and, if
disaster does strike, to help rebuild them. He maintains offices in Columbus and Cincinnati.

Outside the Red Cross, Ken has served on several community boards, was an active Scout Leader through his sons’ attaining their Eagle Rank and is currently active in his church, as an alumni volunteer with Ohio Wesleyan, and Rotary. A Rotarian since 1997, he has served as club president and in several board positions over 14 years, as Secretary-Treasurer of the Perrysburg Rotary Foundation for eight years, and for seven years as District 6600 Trainer and Lead Facilitator Trainer for the All Ohio Presidents Elect Training Seminar. Currently, he is a member Ohio Pathways Rotary E-club with members in several states and seven countries and chairs his District’s Rotaract Committee, seeking to create and nurture
college-based clubs as they engage Rotary.

Working primarily in Columbus, Ken lives in Perrysburg, a suburb of Toledo, with his wife Tara, a family physician and a 1993 OWU alumna. They have two sons, Will, a third-year law student at University of Toledo, and Jack, a senior at Bowling Green State University majoring in Integrated Social Studies Education and History.

Ken would like to be involved and contacted regularly to assist with:

Ken was a History & Religion major at OWU, and he was highly involved as a student on campus as a Transcript Columnist, Student Chaplain, Interfaith Committee, House of HOPE (SLU- Helping Other Pursue Education), tutor for GED students at Delaware JVS, campus judicial, religion & history honoraries, and academic conduct review board. Ken has been on the reunion committees for his 10th, 15th, 20th and 25th reunions. He served as an annual fund volunteer since the early 2000s, and he has also mentored OWU students formally &amp; informally through Career Connection &amp; the Office of Multicultural Student Affairs.

Ken has opportunities at The American Red Cross, and his staff takes on interns with interests in public health, social work, emergency management, education, government, and public administration. He has also had OWU students intern with a focus on religion &  diversity studies. He can connect students to the Fund Raising, Volunteer Services, and Operations offices for potential internships.