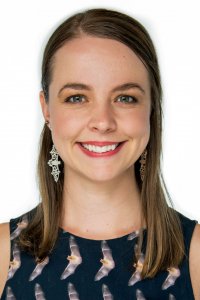 Kristen Lear is a bat conservationist and environmental educator with over 11 years of experience leading bat research, conservation, and outreach projects around the world (including the U.S., Australia, and Mexico), coordinating international teams, and guiding conservation policy for endangered bat species. She earned a B.A. in Zoology from Ohio Wesleyan in 2011, where she assisted with a project studying the pest control services of bats in pecan orchards and led a bat house study for her Honors research (funded by an OWU Theory to Practice Grant). Following graduation, she earned a Fulbright Scholarship to study the critically endangered Southern bent-wing bat in South Australia. In 2020, Kristen earned her Ph.D. in Integrative Conservation from the University of Georgia. Her Ph.D. work, which was supported by a National Science Foundation Graduate Research Fellowship, combined natural and social science approaches to aid in the conservation of the endangered Mexican long-nosed bat in northeast Mexico, where she worked with local collaborators and rural agave harvesters to plan conservation efforts. During her graduate work, she also spearheaded the Bulldogs for Bats and Athens Bat Connection conservation initiatives in Athens, Georgia. She now works at Bat Conservation International as the Endangered Species Interventions Specialist leading the organization's Agave Restoration Initiative in the US Southwest and Mexico and helping with the Bat Walk Ambassador program to provide bat walk training to communities around the U.S.

Kristen is a National Geographic Explorer, IF/THEN Ambassador for the American Association for the Advancement of Science working to encourage girls and young women in STEM fields, and a Lifetime Member of Girl Scouts. She is also passionate about public outreach and education, giving bat talks at schools and organizations around the world, leading public bat walks and bat house building workshops, and making numerous media and speaking appearances, including on CBS’s “Mission Unstoppable” TV show, the National Geographic stage, and various podcasts. More information about her work can be found on her website at https://kristenlear.wixsite.com/batconservation and on social media at @batsforlife_kristen (Instagram) and BatsForLife (Twitter).

Happy to be contacted by Zoology/Pre-Professional Zoology, and other STEM majors: