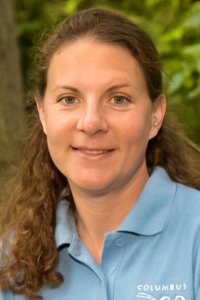 Nikki manages a team of 13 zookeepers and curates the collection for the North America region at the Columbus Zoo and Aquarium. She has been in Columbus since 2015. Prior to coming to the Columbus Zoo, she worked at Zoo New England’s Franklin Park Zoo for 14 years with a variety of taxa including gorillas, large carnivores, large hoofstock, birds, reptiles, amphibians, many small mammals and primates.

Nikki is interested in helping Zoology students improve their resumes, build their interview skills, and finding jobs in the zoology field. She is open to:

Nikki graduated from Ohio Wesleyan in 2001 where she majored in Zoology and Psychology and minored in History. She was a member of the Delta Zeta sorority, participated in Women’s rugby, and was involved in the Zoology club. After OWU, she attended George Mason University for graduate school and received a Master's in Interdisciplinary Studies with a concentration in Zoo and Aquarium Leadership.