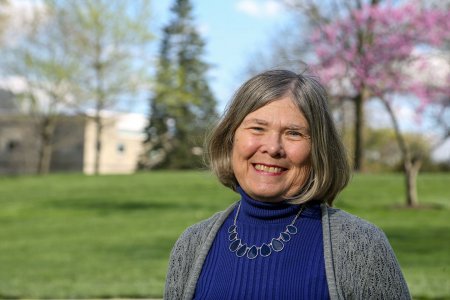 Barbara S. Andereck was born in St. Louis, Missouri, but her family lived in six different cities during the course of her primary and secondary education. Acclimating to so many new environments helped instill in Barbara a high degree of adaptability, a trait which has served her well as a faculty member. Barbara knew early in life that her career would involve teaching, earning a B.S. in Ed. degree in physics and mathematics from Missouri State University. While there, she met her future husband, fellow physics major, David Andereck. It was during this time that she realized her desire to teach could be applied at the university level.

In graduate school at Rutgers University, Barbara studied theoretical condensed matter physics, completing her thesis on transport properties in one- and two-dimensional disordered systems with well-known theorist Elihu Abrahams. Part of this work was supported by a National Science Foundation fellowship. During post-doctoral work at the University of Texas at Austin, Barbara turned her research focus to the nature of phase transitions in liquid crystals, an area that would interest her for many years to come.

In the 1980s, Barbara and Dave moved to central Ohio, where she taught as a visiting assistant professor of physics at Kenyon College, while he joined the faculty in the physics department at OSU.  In August 1985, Barbara joined the Department of Physics and Astronomy at OWU, where her passion for teaching and high level of adaptability served both her and OWU well. It was during these early years of her time at OWU that Barbara and Dave welcomed their two sons, Michael and Jonathan, into the world.

During her first 15 years at OWU, in addition to teaching physics, she was the sole instructor of astronomy, a fact that led a number of her colleagues to believe she was trained as an astronomer. She has taught practically every course the department offers, and her honors course “On Time” has been popular for decades. Her peers have recognized her teaching effectiveness with multiple accolades: the Shankland Award for the Encouragement of Teachers (1994), the Bishop Francis Kearns Award (2008), and the Welch Meritorious Teaching Award (2020). She also developed, and has taught frequently over many years, a sophomore-level majors course (Contemporary Physics) designed to combine concepts from modern physics with other powerful ideas used in physics that are commonly missing from the undergraduate physics curriculum. As a result of her work developing this course, she has written a unique manuscript (Underlying Physics) that introduces physics students to such powerful ideas as estimation, states and operators, symmetry, group theory, and conservation laws.

Barbara also kept active in research. During her time at OWU, she and a collaborator from OSU, Bruce Patton, developed a theory for the nematic-smectic A phase transition in liquid crystals that was published in the prestigious journal Physical Review Letters, and one researcher described the theory as “manna from heaven.” She has also worked on projects (often with students) in synchronization (of coupled metronomes on a freely moving board, and in the orbital motion of the inner moons of Jupiter) as well as archeoastronomy (collaborating with OWU Fine Arts Professor Jim Krehbiel on a study of the Ancestral Puebloans of southeastern Utah).

Barbara’s service to the university has been prolific. She served many years on committees such as the Teaching and Learning Committee, Academic Policy Committee, and the University Governance Committee, which she chaired more than once. She also served on two presidential searches. From 2006 to 2019 Barbara took on a number of administrative roles, such as Associate Dean of Academic Affairs for Assessment and Accreditation, Interim Dean of Academic Affairs, and Assistant Provost for Assessment and Accreditation. She was a major leader in the academic program for all things related to assessment. She also guided the institution twice through the reaffirmation of accreditation by the Higher Learning Commission, experience which has led her to become a peer reviewer and team chair for accreditation reviews for the HLC.

It is not possible to do justice in one summary to the many ways Barbara has served both the students and Ohio Wesleyan University. All have benefited from her devotion to OWU and from her seemingly boundless energy and dedication.