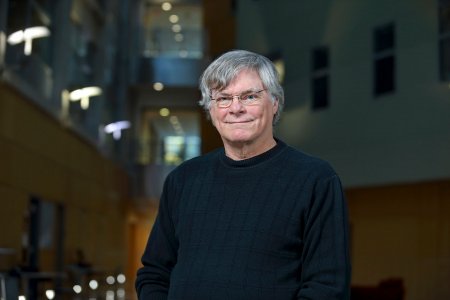 The Department of Chemistry announces the retirement of Dr. Dan Vogt after 42 years of dedicated service to Ohio Wesleyan University. Dan brought his expertise in chemistry and biochemistry to OWU and built the biochemistry program from the ground up, building an incredibly successful biochemistry major that has served both chemistry and pre-professional majors for many years. As part of this program, Dan has developed and taught General Chemistry, Biochemistry, and advanced topics seminars in Neurochemistry and Mechanisms of Enzyme-Catalyzed Reactions. Dan’s commitment to teaching and mentoring students has been a hallmark of his time at OWU.

Dan arrived at OWU in 1979 after receiving his American Chemical Society (ACS) certified B.A. in chemistry from Washington and Jefferson College and his M.S. and Ph.D. in chemistry (with a biochemistry emphasis) from Northwestern University. While at Northwestern, Dan studied chemical modification of hemoglobin to alleviate the erythrocyte sickling phenomenon in sickle cell anemia under the direction of Dr. Irving Klotz. At OWU, his research focused on investigating the chemical modification of proteins, including pharmacologically acceptable chemical agents that penetrate the erythrocyte membrane and modified hemoglobin. Funding for much of this work was supported by grants from NSF, NIH, and Dupont.

Dan’s years of dedicated service to Ohio Wesleyan University extend well beyond the Chemistry Department. His strong commitment to faculty governance led him to serve as committee chair for several faculty committees, such as the Faculty Personnel Committee, the Academic Policy Committee, and the Committee on Admissions and Financial Aid. He was also a part of several presidential search committees, numerous tenure-track faculty search committees, and chair of the Department of Chemistry for over 10 years, providing guidance and mentoring along the way.

Over the years, the numerous OWU students that Dan worked with and mentored benefited the most from his time. In the classroom and research laboratory, students have learned from and grown from his guidance. In the words of one student, “Dr. Vogt was an amazing teacher and research mentor. He is the reason I became a biochemist.” This type of sentiment led to Dan winning the Sherwood Dodge Shankland Award for the Encouragement of Teachers in 1986.

In addition to working with students in the classroom, Dan served as a faculty advisor to the Delta Delta Delta sorority for several years. He was also known to participate in productions in the Theatre Department, appearing in two main stage productions, 13 one-act plays, and six senior projects. He was inducted as an Honorary Member Theta Alpha Phi National Theatre Honorary Fraternity in appreciation of his work. As another student remarked, Dan “epitomized a professor being involved in the overall growth and development of students … Thank you for being one of the best professors”.