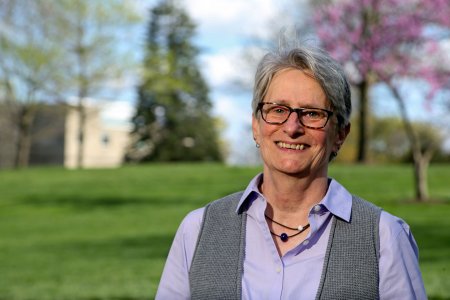 Paula M. White, Ella Faye Schaaf Rodefer Professor of Education, was called to service in higher education by her recognition of the need for qualified teachers willing to teach in diverse settings. Acting upon her heartfelt belief that all students deserve excellent teachers regardless of their life circumstances, Dr. White dedicated the past 21 years to preparing Ohio Wesleyan teacher education students to work with diverse students in diverse settings. Dr. White is the recipient of the Presidential Award for Racial and Cultural Diversity (2013), the Welch Meritorious Teaching Award (2014), and the Libuse L. Reed Professorship (2017 – 2019).

Dr. White attended the University of Denver, earning her B.S. in mathematics with a minor in computer science. She began work as an aerospace software engineer for Hughes Aircraft and Martin Marietta. Later, Dr. White discovered a love of teaching and returned to higher education, where she earned her teaching license and an M.A. in mathematics curriculum and instruction from the University of Colorado. She then earned her Ph.D. in educational psychology with a focus on individual differences from the University of Houston.

Dr. White began teaching in a traditional middle school in Colorado and later moved on to teach in more diverse settings—first in a locked psychiatric facility, then in a drug and alcohol rehabilitation center, and next in an alternative middle school in the Houston Independent School District. Dr. White taught in the public schools for 11 years before coming to Ohio Wesleyan.

In the Education Department at Ohio Wesleyan, Dr. White used her pedagogical skills to meet college students where they were and stretch them academically to attain expertise in practices and the knowledge base they would need to be successful in the classroom. Since 2001, Dr. White has served as the director of the Middle Childhood Program, and she currently serves as the interim director of the Elementary Licensure Program. She is the chair of the Department of Education, a position she also held from 2010-2013.

Dr. White has served on almost every faculty governance committee and chaired the Academic Policy Committee for multiple years, and her contributions extend well beyond campus, particularly in the area of middle childhood education. Dr. White is the past president and current treasurer of the Ohio Middle Level Professors Association.

Dr. White has a long record of advocacy for social justice. She helped found and co-direct the social justice major at Ohio Wesleyan. She co-chaired Ohio Wesleyan’s President’s Commission on Racial and Cultural Diversity from 2005-2012. After completing the Social Justice Institute’s training in 2010, Dr. White developed EDU 115: Teaching for Equity and Social Justice. Dr. White has traveled extensively with students, co-leading numerous experiential travel-learning trips along the National Civil Rights Trail. Additionally, she was a co-advisor for the student Habitat for Humanity organization, traveling with them on six Spring Break Interfaith Service Trips.