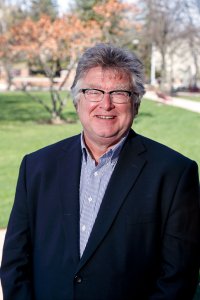 Robert Olmstead is one of America’s great authors. Bob has published masterful work in several genres: seven novels, a memoir, a short story collection, and a textbook for fiction-writing workshops. His brilliant books are internationally acclaimed. He is a writer’s writer as well as an inspirational teacher of writers at OWU for nearly two decades.

Olmstead’s taut sentences explore wide expanses of American history. They have a grandeur and ambition that makes much longer novels feel small by comparison. They burst with an intensity of subject, character, action, and setting. His celebrated trilogy, Coal Black Horse, Far Bright Star, and The Coldest Night, follows one family, the Childs, as they fight in the Civil War, the Korean War, and an ill-fated U.S. Army expedition to hunt Pancho Villa. His most recent novel, Savage Country, describes massive buffalo hunts that threaten the animal with extinction. The novels describe horrifying acts of violence and brutality in prose so austere, evocative, and rhythmically and descriptively precise that it must be called beautiful.

A number of critics have celebrated these novels’ impressive achievements. The Chicago Tribune called Coal Black Horse “magisterial,” “as sensate as poetry and forbidding as any squall, steeped in detail but bound by few storytelling conventions.” The Washington Post praised The Coldest Night: “Olmstead is an immensely gifted stylist, his prose capable of conveying the magic and passion of first love as well as the ferocity of battle.”

Bob grew up as the seventh generation raised in a family dairy farm in Westmoreland, New Hampshire. He received a B.A. in English and education and an M.A. in creative writing, both from Syracuse University, supporting himself in graduate school by “teaching in the public school, raising a few heifers, and during the summers running a construction business,” as he recalled in an interview. The writers Tobias Wolff and Raymond Carver directed his M.A. thesis, which formed the basis for his first book, the short story collection, River Dogs. Wolff later praised Bob’s writing: “Robert Olmstead is a nation unto himself” and “an original in the American grain.”

Bob came to OWU in 2002 to serve as the director of the creative writing program, having previously held the same position at Boise State University. At OWU, he was known for his skillful, devoted mentorship of creative writing students. Under his influence, OWU students learned the rewarding task of crafting clear, expressive language to tell complex stories. The commitment to the craft of fiction that Bob taught his students helped many gain admission to America’s most prestigious graduate programs. Under his directorship, the creative writing program served as “a launching pad for writers” (as one graduate put it).