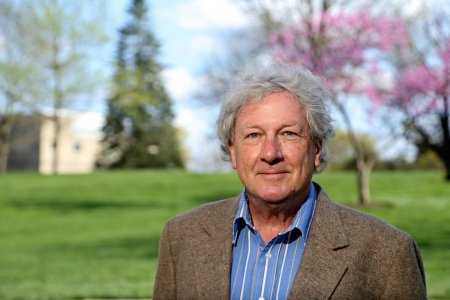 Thomas K. Wolber was born in Germany, where he completed his undergraduate studies at the Albert-Ludwigs-Universität Freiburg before coming to the United States in 1977. Pursuing his passion for German literature, culture, and civilization, he completed his M.A. and Ph.D. at the University of Wisconsin-Madison. Since arriving at Ohio Wesleyan University in 1990, he has been consistently devoted to his students and has been an integral part of both the OWU and Delaware communities, dedicated to sustainability and the dissemination of community-related news.

It is, in fact, the word “community” that friends most often mention when talking about Prof. Wolber. Many residents of the Delaware community depend on his newsletter, “Community Matters,” which brings the academic and non-academic communities of Delaware together to gain a sense of clear and accurate updates of the goings-on that affect them the most. He has also regularly provided readers of The Transcript with concise interpretations of literary works, gallery exhibitions, and theatrical performances available to the OWU community. Furthermore, his reviews of the Central Ohio Symphony’s concerts have been published in the Delaware Gazette and are available on the symphony’s website.

In the classroom, Dr. Wolber has been a source of knowledge on the German language and the subtleties of German culture and history. He has always put his students first, providing numerous tutorials and small classes on a wide range of subjects in the German language and on German studies. He has acted as a dedicated mentor committed to individually crafted student projects, and with a sense of humor and infinite patience, he has exemplified OWU’s historic commitment to the humanities and interdisciplinary studies. As a scholar of Hispano-German cultural relations over the centuries, his editorial and creative achievement is exemplified in his co-editorship of The Lion and the Eagle: Interdisciplinary Essays on German-Spanish Relations over the Centuries, published by Berghahn Books in 2000. In addition, he has written dozens of articles and book reviews in the areas of German and comparative literature for a wide spectrum of journals and yearbooks.

At OWU, Prof. Wolber was elected to a number of committees and served as secretary of the faculty for many years. A steadfast member of OWU’s Sustainability Task Force since its inception, he routinely picked up debris and recyclables all over campus. In recent years, he has acted as a guardian of the OWU labyrinth, planting flowers and checking it for damage after storms. He also has enriched the campus community in ways that affect students more personally. For example, he has consistently and visibly supported the many interfaith, interracial, international, and LGBTQ+ efforts and initiatives led by the Chaplain’s Office.

Dr. Wolber’s contributions to OWU will be missed, but his commitment to the betterment of his community will surely be observed for years to come.