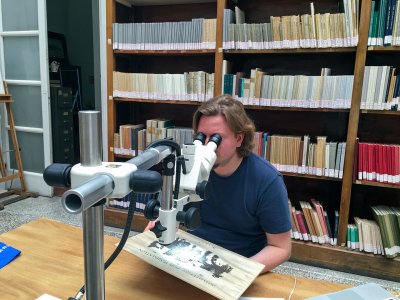 Michael McOsker received his Ph.D. from the University of Michigan in 2015 with a thesis on the poetics of Philodemus of Gadara, a first century Epicurean philosopher and poet.

His research focuses on the Herculaneum papyri, a library of philosophical texts that was carbonized by the eruption of Mt. Vesuvius in the same eruption that destroyed Pompeii. Many of these texts were unrolled shortly after their discovery in 1752-4, and with microscopes, infrared photography, and patience, these texts can be deciphered, edited, and translated. New techniques, including X-ray tomography powered by a cyclotron, are being developed to read the rolls that were never unrolled. Philodemus, perhaps the owner of the library, was closely connected to Julius Caesar’s father-in-law, L. Calpurnius Piso Caesoninus, and his texts preserve irreplacable evidence for Greek philosophy and culture at the time of Julius Caesar and the end of the Roman Republic.

Other Areas Of Interest

His teaching interests are in Greek and Latin at all levels, mythology, linguistics, ancient sports and culture, and ethics, physics, and free will in ancient philosophy.