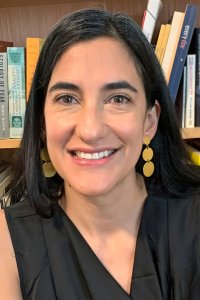 Alejandra Rojas Silva joined the faculty this year and is the primary art historian for the department. Her teaching and curatorial practice engage modern and contemporary Latin American Art, while her academic research focuses on Indigenous and Creole images of the natural world in the early modern period in the Americas. Her classes explore the intersection of disciplines, geographical fields and time periods. Beyond introductory surveys of modern and contemporary art generally, and Latin American Art (from pre-Columbian to contemporary) specifically, Rojas Silva will offer thematic seminars in topics such as “Wonder, Contact, and Otherness,” and on the historical roots of issues such as race, class, religion, and gender as revealed by art objects from different cultures. Her current book project, Flora Incognita: Picturing Nature in Sixteenth-Century Spanish America, analyzes some of the first images of American nature produced after the conquest. Parsing the historical motives for different stylistic choices, this book shows how Indigenous and European artists negotiated their place within the new colonial order though their botanical representations. She is also co-curating the exhibition Art Between Worlds: The Ancient America’s Now programmed for the fall of 2023 at the Columbus Museum of Art.