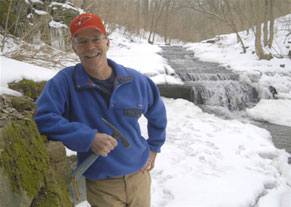 Keith Mann is a paleontologist and teaches history of the earth, paleontology, sedimentation and stratigraphy, and hydrogeology. He has determined the physiological, environmental, and mineralogical controls of skeletal chemistry in Nautilus from the southwest Pacific; collected early (800,000,000 years old) microorganism fossils and investigated terrace scarp deflation in Greenland; examined groundwater pollution caused by agricultural chemicals in Iowa; measured the effects of deforestation on coral reefs in Panama; and described a new fossil species found in 460,000,000-year-old sediments in Canada. His current research focuses on conodont biostratigraphy to trace sea-level fluctuations on the Wabash platform (in the Midwest) during the Middle Devonian (~395,000,000 years ago). He has published articles in professional journals as well as chapters in scientific books, and recently he edited a book on graphic correlation. Mann has helped organize professional scientific meetings, including a national symposium and an international research conference.