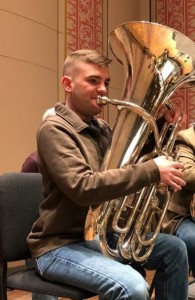 Brandon Christie began studying piano at the age of 8. He came to the tuba in the 5thgrade and found continued success. After winning the John Philip Sousa award in high school for exceptional musicianship he attended The Ohio State University for his Bachelor of Music and Bachelor of Science degree in Business. Following several recordings on the Naxos label and completing his studies at Ohio State, Brandon furthered his music education at the University of Massachusetts, Amherst where he was a teaching assistant and performed in the Graduate Quintet. While in Massachusetts, Brandon was Principal Tuba with the Amherst Symphony Orchestra and Holyoke Philharmonic. Following his Master of Music degree Brandon was a successful freelance artist in Massachusetts and then won an audition with the 122ndArmy Band (Columbus, Ohio). Upon completing Basic Combat Training, he attended the United States Armed Forces School of Music in Little Creek, Virginia. As a C1 graduate Brandon returned to Columbus as section leader of the 122ndand Principal Tuba with the Brass Quintet. He then returned to his Alma Mater for his Doctor of Musical Arts degree at Ohio State where he is currently all but dissertation. Since returning to Ohio, Brandon has performed numerous times with the Columbus Symphony Orchestra, Columbus Symphony Pops, and Brass Quintet where he is the First Call associate musician. Brandon’s primary teachers include Professor James Akins (Ohio State), Dr. John Bottomley (University of Massachusetts), and Chad Arnow (Dayton Philharmonic). In his free time Brandon enjoys maintaining aquariums, supporting local indie music, and playing amateur ice hockey.