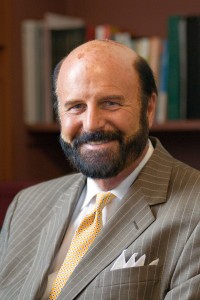 Professor Emeritus of Politics and Government

William Louthan is a Professor in the Department of Politics and Government specializing in judicial politics (especially the United States Supreme Court) and constitutional law (especially civil right and liberties).

After serving for 14 years as Provost and Vice President for Academic Affairs (including one year as Acting President, 1993-94), Louthan now serves OWU as Director of the Lyceum for Liberal Learning in law and as McKendree Professor of Political Science.

He earned his B.A., M.A., and Ph.D. in Constitutional Law and Jurisprudence at The Ohio State University, where, as an undergraduate, he wrote a report on presidential nominating procedures in Ohio (published by the National Municipal League) and, as a graduate research associate working under a grant from the National Municipal League, he studied the impact of reapportionment in Ohio.

Louthan took his first full-time position as Assistant Professor of Government and Public Administration at American University in Washington, D.C., in 1970. During his second year at American University, he served as Director of the Washington Semester Program and as associate editor (for legal affairs) of ELECTIONews (a monthly publication intended mainly for federal, state and local elections officials published by the Washington, D.C.-based Institution for Elections Administration).

In 1972, he arrived at Ohio Wesleyan as an Assistant Professor of Politics and Government to begin a long career as a liberal arts educator. He was promoted to Associate Professor in 1974 and to Full Professor in 1979, and was chosen to occupy the McKendree Chair in Political Science in 1983.

Louthan was presented with the Sherwood Dodge Shankland Award in 1977 and the Bishop Herbert Welch Award in 1983, becoming the first Ohio Wesleyan professor to win both outstanding teacher awards presented annually at commencement. In 1990, he was also honored as the first winner of the Foundation of Independent Higher Education’s Teaching Excellence and Campus Leadership Award.

He has held a number of administrative positions at Ohio Wesleyan including: Acting Dean of Academic Affairs (1977-78), Chair, Department of Politics and Government (1978-84), and Dean of Academic Affairs and Executive Assistant to the President (1984-87). He was the Provost from 1991-2005, and served as Acting President for a little over a year between the Warren and Courtice administrations in 1993-94.

As a faculty member, Louthan has worked on many faculty committees including service at various points as chair of the Academic Policy Committee, the Faculty Personnel Committee, and the University Governance Committee.

He is also the author of dozens of professional articles and more than 50 book reviews and review essays. He served as political science editor of the Ohio Journal of Economics and Politics and as general Editor of the Political Science Series for Kennikat Press. In addition to his work as an editor, he serves regularly as a manuscript reviewer for several professional journals and publishing houses.

Louthan is a past president of the Ohio Association of Political Scientists and Economists. He serves currently as a consultant/evaluator for the North Central Association and as an Academic Assembly Delegate to the College Board. He is married, the father of two, the older of which graduated from Ohio Wesleyan in 1993.