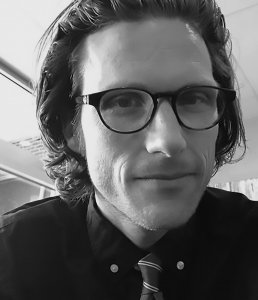 Before joining the faculty at OWU, Kyle McDaniel held a Postdoctoral
Fellowship at the University of Oregon’s School of Journalism and
Communication, where he obtained his doctoral degree in 2016.

While pursuing his B.S. in Journalism, McDaniel served as a
, as well as film and music critic for his
newspaper. He also worked as a freelance reporter
for small newspapers in his native Arkansas.

His tenure as photo editor and assistant director of photography for The
Columbia Missourian expanded his dual interests in photo and video
editing, and provided McDaniel his first opportunity to manage a team of
dedicated staff photographers and videographers.

For the following three years, he served as assistant photo editor
Wisconsin State Journal in Madison, where McDaniel helped
development and publication of multimedia projects for madision.com.
As an online photo editor at The Washington Post, he created and edited
photography slideshows on international and national news and lifestyle
topics for the publication’s website He then briefly served as a video
assets producer for the National Geographic Channel before pursuing a
career in academia.

McDaniel has also served as an adjunct instructor at Arkansas State
University, as well as of record for communication
media production courses at the University of Oregon.