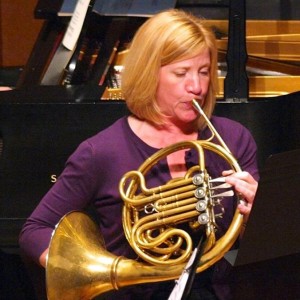 Kimberly McCann earned a Bachelor of Music Degree from Wheaton College Conservatory of Music in Wheaton, Illinois. She went on to earn a Masters Degree in Horn Performance from Northwestern University, where she studied with Dale Clevenger. During her studies in the Chicago area, she played with numerous off-Broadway productions and local symphony orchestras, including Chicago’s Classical Symphony. Since moving to the Columbus area nearly 15 years ago, Ms. McCann has become a desired teacher and performer in Central Ohio. She is principal horn in the Newark Granville Symphony, Westerville Symphony Orchestra, and WindWorks chamber winds. She has been featured as a soloist with the Newark Granville Symphony, the Westerville Symphony, and the Knox County Symphony. In November 2008, Kimberly appeared with WindWorks as a soloist, premiering Beethoven’s Horn Sonata as arranged for solo horn and wind accompaniment. She has also made appearances with the West Virginia Symphony Orchestra as an offstage soloist, and Mannheim Steamroller.