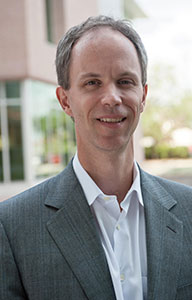 Michael Deem was the Phi Beta Kappa Visiting Scholar at Ohio Wesleyan this year. He was on campus on Thursday and Friday, 4 and 5 April. In addition to visiting classes, he met with students and faculty, and gave two lectures.

On Thursday, 4 April, his lecture was part of the Science Lecture Series: “Evolution in the Bacterial, Archaeal, and Jawed Vertebrate Immune Systems.”

On Friday, 5 April, his lecture was: “In Search of Fundamental Mathematical Laws of Biology.”

He is a fellow of the American Institute for Medical and Biological Engineering, the American Physical Society, the Biomedical Engineering Society, and the AAAS. His honors include a Sloan Foundation fellowship; the Camille Dreyfus Teacher-Scholar Award in 2002; a National Science Foundation CAREER Award; the Colburn Award for excellence in publications as well as the Professional Progress Award from the American Institute of Chemical Engineers; and the O’Donnell Award from the Academy of Medicine, Engineering & Science of Texas. He gave the Vaughan Lectures at Caltech in 2007 and was chosen one of MIT’s Technology Review 1999 Young Innovators. He is an associate editor of Physical Biology and Protein Engineering Design & Selection.