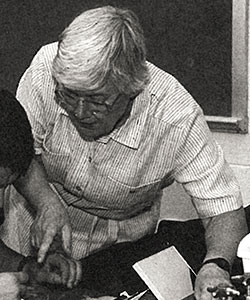 Anne E. Fry was born in Philadelphia, Pennsylvania, to parents trained as medical professionals. Naturally, she grew up with the assumption that everyone talked about internal organs and medical procedures after work and during dinner. She entered Mt. Holyoke College without a firm commitment to a major, but then she heard of a professor who commanded the respect and admiration of all students those who struggled, as well as those who excelled. She enrolled in that professor’s class, and the die was cast. There, in the zoology department, she found a love of learning, and developed relationships with her college mentors that persist to this day.

Bachelor’s degree in hand, Anne enrolled at the University of Iowa, where she bolstered her expertise in developmental biology by completing a master’s degree. Then she left off taking courses, and spent two years teaching biology at Carleton College, a pivotal experience that whetted her appetite for the advanced degree that would open the way to a career in college teaching.  She returned to graduate study and completed a Ph.D. in developmental biology with a focus on amphibian metamorphosis at the University of Massachusetts.

In 1969, Ohio Wesleyan was lucky enough to attract and hire the new Doctor Fry.  Her first teaching assignments included an advanced course in Developmental Biology and the precursor of today’s Introduction to Cell Biology course. She quickly developed a reputation as a meticulous researcher and a demanding, fair, and inspiring teacher. In 1976, Anne became the youngest faculty member ever to receive Ohio Wesleyan’s Welch Meritorious Teaching Award. Full circle: she had become precisely the kind of teacher/researcher from whom she drew inspiration as an undergraduate.

Anne also embraced campus life outside her department.  In 1973, she, along with colleagues Lauren Wiebe and Ruth Bauerle, created Ohio Wesleyan’s first student­initiated course in Women’s Studies. “The Feminine Experience in American Society” was an offering that pre-dated the formation of OWU’s Women’s Studies Program.

She was also the first woman faculty representative to the North Coast Athletic Conference, a reflection of her lifelong interest in sports.  Anne has supported countless student-athletes with her encouragement and presence at games, and she is an avid sportswoman herself.  Many friends have played golf with her.  Few are silly enough to do so for money.

Anne assumed the role of chief health professions adviser in 1982. This institution has a long and distinguished record of preparing students for the health professions, but Anne raised the program’s level of service and organization to new heights.

Within the zoology department, she has been a selfless team player, even re-tooling in recent years to become the departmental physiologist for the good of the order.

Throughout her career, Anne has been recognized by the entire University community as a person with exceptional measures of integrity, intelligence, and good judgment, and the courage to take a stand on principle.  Her peers have turned to her time and again, electing her to membership on the committees that carry out the University’s most sensitive and difficult work: Governance, Personnel, Academic Policy. First-term freshmen and college presidents alike listen carefully to Professor Fry.

Modest to a fault, she has steadfastly avoided the limelight over the years. Nonetheless, Professor Anne E. Fry leaves lasting benchmarks at Ohio Wesleyan University.