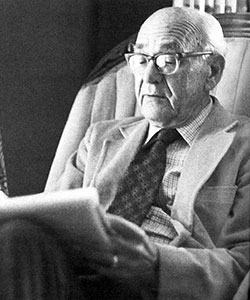 Benjamin Townley Spencer was referred to as a gentleman with a sense of humor, humble, exquisite, the “best and sweetest” and a great teacher at a gala honoring his 75th birth anniversary Saturday night.

Spencer’s reply to the many compliments awarded him was gentlemanly, humorous, humble and scholarly – with Spencer exhibiting all of the qualities attributed to him.

The event, sponsored by Ohio Wesleyan University to honor one of its most loved professors, included a reception, dinner and comments from former students and colleagues of Spencer.

The event also honored the 415th birth anniversary of William Shakespeare. Spencer taught Shakespeare and American literature at OWU from 1930 to 1969.

The Memorial Union Building ballroom and faculty lounge were filled with colleagues, friends and former students of Spencer and decorated with photographs turned into posters of Spencer and his family and of William Shakespeare.

There were posters of young Ben at the piano, his wife Virginia as the “girl graduate,” Ben as the 1909 mascot of the Kentucky Wesleyan University basketball team and the home in which Spencer grew up.

“Happy Birthday” was sung once to Shakespeare, then to Spencer. Both birth anniversaries are today.

Mildred Newcomb, chairman of the English department at OWU and mistress of ceremonies, began by telling Spencer, “You may be somewhat tired of sharing your birthday with Sweet William.”

The first tribute of the evening came from Chad Dunham, ’29, a colleague of Spencer’s at OWU for many years. Dunham said, “It is hard to think of our own generation as being remarkable. Ben was never one to take himself or his achievements too seriously. He is strong and forthright, but always gentlemanly. Words like respect, admiration and affection are not enough.”

Owen Neff, ’40, said, “Fortune smiled on us when she reached out and touched Ben Spencer on the arm and said, ‘teach.’ There is one word to describe his service to this university – his whole life was ‘exquisite.’ ”

Lynn Kemp Martin, ’53, said she received a letter from Spencer in which he said of the planned birthday celebration, “I cannot imagine what I have done or been to deserve such an honor.”

Mrs Martin proceeded to tell him what he had done, calling him “that most rare and civilized of human creations – a gentleman with a sense of humor.”

She presented Spencer with a dozen red roses and said, “Bravo.”

Charles Weis, a member of the English department faculty who helped organize the event, said “The memory of your leadership has proved a beacon to us in this murky decade.”

Weis gave Spencer a “wallet, stuffed, figuratively at least, with our memories and good thoughts of you.”

The gift was a canvas bag. On one side is printed “To be” and on the other, “Or not to be.”

“Our lives are richer because yours is so rich,” said Helen Crider Smith, ’56. She and her husband Gordon, ’54, are heading a drive to raise funds for the Ben Spencer endowed Professorship in Literature.

Margaret Pickett Sagan, ’48, presented Spencer with a ring to replace a college ring he lost several years ago. “We hope that you will remember us, because we will always remember you,” she said. The gift was from all present.

When it was Spencer’s turn to speak, he said, “I was afraid to get up and speak because you might leave and say, ‘What was all the fuss about?’ ”

Spencer said the committee added Shakespeare to the event to “fortify and give magnitude to the celebration.” He likened their thinking to the 1960s saying, “What if they gave a war and nobody came?”

Spencer said anything he had contributed to the college or those present was integrally tied up with the support of his wife.

Paraphrasing Walt Whitman, Spencer said it was not the teacher or the classroom which was the “complete thing.” He said the student must take the hints and clue which are all the teacher can give.

The highlights of the evening were numerous – from Spencer himself, to music by Joan Murchland and Joann Fuller Hopper, to readings by Robert G. Brand ’79, to a moving impromptu recitation from “Hamlet” by Dr. Richard Williamson, ’37.

Benjamin Townley Spencer, arguably Ohio Wesleyan University’s most beloved and respected professor at the time of his retirement in 1969, died Sunday at Edgewood Manor nursing home in Westerville. He was 92.

Professor Spencer, who taught Shakespeare and American literature at OWU for 39 years, won the prestigious President Herbert Welch Award for Meritorious Teaching the first year it was offered, 1963. He was the only professor ever to have an endowed chair in his honor established during his lifetime. He was among the few to receive an honorary doctorate. OWU conferred a doctor of literature on him in 1974, five years after his retirement.

His former students so loved him that in 1979 – 10 years after his retirement – they helped arrange a 75th birthday celebration for him on campus. More than 250 alumni, faculty colleagues, and others attended. Among tributes paid that night was one made by a former Delawarean, E. Fred Carlisle, who holds a distinguished record in higher education at Michigan State, Miami, and Virginia Tech universities. Carlisle wrote: “Benjamin T. Spencer comes as close to the ideal teacher and scholar as most of us will ever see.”

Spencer wrote two books, The Quest for Nationality in 1957 and Patterns of Nationality in 1981. He edited Memorable Dogs: An Anthology, published by Harper & Row in 1985. Helen Crider Smith, a 1954 alumna and now chairwoman of OWU’s Board of Trustees, as associate editor, helped produce the book that reflected her favorite professor’s devotion to literature and love for dogs.

A prolific contributor to scholarly journals, he won the Norman Foerster Award for an article on Sherwood Anderson published in American Literature in 1969. He won a Library of Congress grant-in-aid in 1945-46.

He is survived by a daughter, Melinda Billingsley of Manitou Springs, Colo., and three grandchildren, Trinka Fouts of Delaware, David Fouts of Newport, Ore., and Tamorah Draper of Duluth, Ga., and four great-grandchildren. His wife, Virginia (Morrison) Spencer, died May 2, 1988.

A memorial service will be held later at William Street UMC. Burial will be in Winch­ ester, Ky., beside his wife’s grave. Bennett­Brown Funeral Home and Crematory is in charge of arrangements. Donations may be made to OWU’s Beeghly Library or to the Delaware County District Library for children’s books.