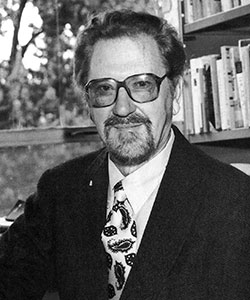 I am delighted to announce that the winner of the Welch Award for 1996 is professor of philosophy, Dr. Bernie Murchland.

Dr. Murchland’s principal research interests are in the history of ideas, the philosophy of values, and the philosophy of education. He has published well over one hundred articles and reviews and he has translated, edited, or authored nearly two dozen books. Perhaps best known among the books he has written are The Age of Alienation and The New Iconoclasm, published in the 1970’s, and his four recent works dealing with some aspect of education and democracy: Voices in America, Voices in American Education, Higher Education and the Practice of Democratic Politics, and Voices in Democracy, all published during the last ten years. He also is the editor of the Civic Arts Review for which he conducts the published interviews and writes editorials. In 1992, he was the recipient of the Ohio Philosophical Association’s distinguished scholar award.

Dr. Murchland is, according to his students and in their words, “a truly extraordinary teacher,” “insightful,” “understanding,” “easy to approach,” and “very helpful.” As one student put it: “He stimulates thought through his lectures and his humor.” His classes are called: “cool,” “awesome,” and “very existential.” “Let him help you dig around in yourself,” said another student. “This is the most thought-provoking and intellectually stimulating course I have had at OWU. The pinnacle of my four years.” said another. Yet another concluded: “I can’t say enough about Dr. Murchland; OWU is privileged to have him as a member of its faculty; he is a professor no one should graduate without coming into contact with.”

That is most certainly the case.