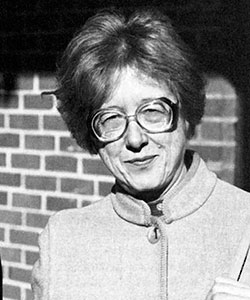 From her earliest days, Corinne Lyman felt comfortable in academic institutions. Her father, when not working the family farm in upstate New York, taught in college English departments in West Virginia, New Orleans and Colorado. Her mother was a College Registrar.

Corinne spent her undergraduate career at Swarthmore College majoring in English Literature.  She did not immediately attend graduate school, but rather held a number of positions doing research and providing secretarial support for significant individuals and organizations involved in international relations. These would include Dr. Henry Kissinger and the Harvard International Seminar, the British Section of the International Commission of Jurists in London, Malcolm Moos in the Office of the Messrs. Rockefeller and the Office of U.S. Representative Alphonzo Bell of California. After returning to academics, Corinne received her M.A. from New York University Graduate School of Government and International Relations. Then before arriving at Ohio Wesleyan in 1968, Corinne provided research assistance for the Washington Center for Foreign Policy Research and Dean Acheson, former U.S. Secretary of State, as he worked on his major book, “Present at the Creation.”

After arriving at OWU, Corinne finished her doctorate from The Johns Hopkins School of Advanced International Studies.  By the end of her first decade of teaching at OWU, she had been awarded the Sherwood Dodge Shankland Teaching Award. She also led the initiative to establish the International Studies Program. Under Corinne’s leadership as director, that program is concluding twenty successful years of graduating majors and minors, many of whom have gone on to receive graduate degrees in international relations from some of the most prestigious programs.

Throughout her thirty years of teaching at Ohio Wesleyan, Corinne has served as a mentor for American and international students interested in international relations. She has exemplified a cosmopolitan and humane approach to the study of the relationships among nations. Repeatedly throughout her teaching career, Corinne has enriched and refreshed the knowledge she gained in graduate school and through her research positions by traveling abroad. Teaching in London and Strasbourg, as well as attending seminars and studying in the Middle East, the Soviet Union, Japan, China and a number of European destinations, she integrated these experiences with the theories and analyses in the legendary lists of academic literature she assigns in her courses.

During her career at Ohio Wesleyan, Corinne has served on various university committees and, on occasion, as chair of the Department of Politics and Government. She has a broad and deep appreciation of the fine arts and literature and has cultivated a wide range of interests to enrich her life outside of academe.  Active in the local community for many years as a cellist in the Central Ohio Symphony Orchestra, an organizer of the Great Decisions series and a member of the League of Women Voters, Corinne exemplifies the liberal arts tradition.

Written by Craig Ramsay, Professor of Politics and Government